A film recommendation from Bob Laemmle.

The Attack is a fascinating drama that examines the Israeli/Palestinian situation from the vantage point of Lebanese Director Ziad Doueiri. Raising hosts of questions but resisting clear-cut answers, the filmmaker applies a deft and even-handed approach to his subject. Under Doueiri’s supervision, the acting is superb and believable to the point that it almost feels like you’re watching a documentary.

The story of how The Attack was made and distributed is nearly as compelling as the movie itself. Shot on location in both Israel and the Palestinian territories, the producers had to navigate and overcome complex political, bureaucratic and security issues. What’s more, the controversial nature of the film has led to a revolving door of financial backers.

While screening successfully to Arab audiences via the festival circuit, it’s unfortunate that the film will likely not be released in the Palestinian territories or most other Arab countries. However, it will play in Israel and tracking its performance there should prove interesting.

Of course, movie-goers around the world including Laemmle audiences here in L.A., should consider themselves fortunate indeed to be able to reap the benefit of Doueiri’s talent, passion, and commitment. Filmmakers like him and Tobias Lindholm (who’s equally riveting Danish thriller A Hijacking is also currently running) are just two present-moment examples of the incredible work being done by filmmakers across the globe. We are truly in a golden age of world cinema. Let’s be sure not to miss it!

The Attack is currently playing at our Royal and Playhouse 7 locations. It will be opening at the Town Center 5 on July 3.  Click here for more details.

Meet the people behind the terrific new documentary THE GIRLS IN THE BAND this weekend. Here’s the schedule. All screenings begin at 11 AM:

On Saturday, June 22, there will be a Q&A with one of the subjects of the film, Roz Cron, at the TOWN CENTER 5.

On Saturday, June 22, there will be a Q&A with Director Judy Chaikin at the PLAYHOUSE 7.

On Sunday, June 23, there will be a Q&A with Director Judy Chaikin and Executive Producer Mike Greene at the MONICA 4. 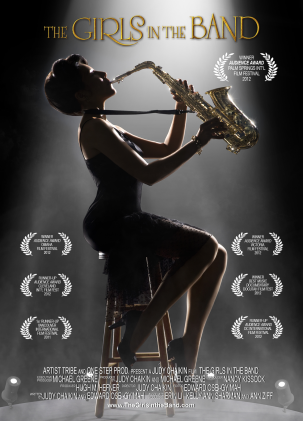 THE GIRLS IN THE BAND producer Nancy Kissock will participate in a Q&A after the 11 AM screening at the Monica in Santa Monica this Saturday, June 15.

Director Judy Chaikin will participate in a Q&A after the 11 AM screening at the Playhouse 7 in Pasadena on Saturday, June 15.

Director Judy Chaikin and Producer Mike Greene will participate in a Q&A after the 11 AM screening at the Monica in Santa Monica on Sunday, June 16.

Producer Nancy Kissock will participate in a Q&A after the 11 AM screening at the Town Center in Encino on Sunday, June 16.

For a limited time, help out ‘ol planet earth by purchasing our tasty Climate Ride Concession Specials at a sweet price!

CLIF Bars go for $2. O.N.E. Coconut Water (16.9 oz) for $3 and our Climate Ride Combo featuring CLIF Bar, Coconut Water, and small popcorn for only $7. You may swap out a small bottled water or fountain drink if you don’t fancy the coconut water. Though we’re not sure why you would; we can’t get enough of the (admittedly) trendy beverage!

Proceeds from the specials support CLIMATE RIDE CALIFORNIA, a 5-day, 320 mile group cycling adventure through Northern California. The ride (May 19-23) benefits a variety of environmental causes focusing on renewable energy and sustainable transit.

This really is a fantastic and worthwhile cause. We should all be taking steps to help the planet after all, and shifting our attention towards renewable energy is a fundamental part of this.

With this in mind, if you want to go the extra mile, you might also want to do some research to ensure that your home energy comes from a renewable source. Not sure where to start? If you are reading from Texas, researching electric companies in dallas can make it easier for you to compare your options.

Who knows, you might even discover that switching to a more environmentally conscious energy supplier could save you some money on your electricity bills.

So, that being said, how exactly can purchasing tasty snacks help the environment?

So eat up, drink up and do some good! Enjoy.

It’s a time of transformation for Laemmle and I’m pleased to have this opportunity to share some exciting new developments with you. First and foremost, there’s our new location, the Laemmle NoHo 7! This state-of-the-art theater opened last December at 5240 Lankershim Blvd. in the heart of the North Hollywood arts district. The venue features seven screens, digital projection, stadium seating, and is only two blocks from Metro. With the NoHo 7, we look forward to contributing to the burgeoning arts and cultural scene in North Hollywood and the broader East Valley region.

On the virtual front, we have a brand new website in the works. It will include features such as Premiere Card ticket purchasing and reloading, site customization tools, staff reviews, theater blogs, and a slew of other enhancements. Once there has been some details relayed back to us by the web design team, that can handle website design in Vaughan and similar locations for example, we’ll get back to you with some more features and benefits of the newly designed site!

We’ve also seized this moment to update our logo and other communications with an aesthetic and attitude that better reflects who we are today and where we’re heading. The new header on this website is just the beginning. You’ll see further evidence of the new look in the coming days as we transition everything from our flyers and email newsletter to our for-sale merchandise and even employee uniforms (don’t be afraid to tell ’em how smart they look!).

As you may have heard, after two decades serving the Hollywood area we were unable to come to terms on a lease extension and have closed our Sunset 5 theater. We leave with fond memories and a deepening commitment to exhibiting quality film throughout Los Angeles. When the time is right, we will be back. In the meantime, we look forward to the imminent NoHo opening as well as other future projects where we’ll be taking on the role of both landlord and tenant.

Of course, these are just the highlights. To stay fully current with all things Laemmle, make sure to follow us on Facebook, Twitter, and on our forthcoming blog. As always, we welcome and value your feedback.

On behalf of my father, Robert Laemmle, and our entire staff I want to thank you for your continued support of independent cinema in Los Angeles. We invite you to join with us as we embark on a new era for Laemmle. It’s one that will combine renewed energy and upgrades in services and facilities and with the one essential and unchanging thing that makes us who we are – our passion for exhibiting intelligent films to discerning audiences such as yourself.

See you at the movies!

PORTRAIT OF WALLY director Andrew Shea will participate in Q&A’s at the Town Center after the 7:50 screenings on Friday and Saturday, July 20 and 21 and after the 1 PM screening on Sunday, July 22.

UNION SQUARE director Nancy Savoca will participate in Q&A’s on the following schedule: