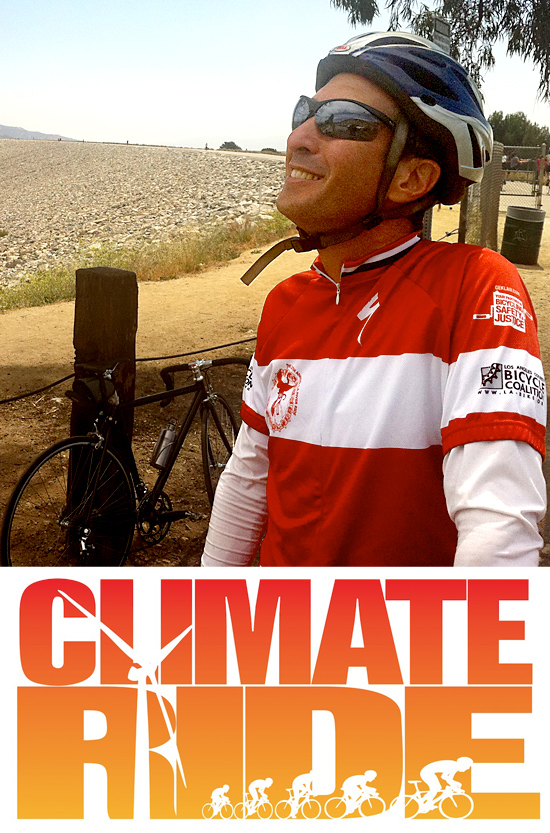 It’s time for our 3rd Annual Ride with Greg Laemmle Climate Ride Contest!  Don’t miss your chance to participate in this life-altering event.  Last year our team was 14 strong and we’re expecting to surpass that number for 2015.  Join us and become part of our amazing group!

What’s more, tell us why you want to ride with Greg and you could win an Unlimited Laemmle Movie Pass for the remainder of 2015, free registration for Climate Ride California, and a $2500 contribution toward your Climate Ride fundraising goal from the Laemmle Charitable Foundation.  See the second and third prize packages, eligibility requirements, and all contest details over on the contest entry page.

An outside panel of judges will select the winners based on the quality of their entry statement so take the time to craft something that’ll really knock their cycling socks off! But don’t wait too long, the deadline for entry is Monday, February 16!

Climate Ride California 2015 is a fully-supported, five-day group ride covering approx. 300 miles of stellar Northern California scenery starting with the awe-inspiring Redwood State Park,  down miles of spectacular coastline, through California wine growing country, and culminating with a jaunt over the Golden Gate Bridge and into the City By the Bay.  Bike fitness is recommended, but the ride caters to all levels of ability.

This coming Christmas Eve (Dec. 24) we will celebrate the 50th Anniversary of the Broadway production with our 7th Annual Fiddler On the Roof Sing-Along!

Join us (at any of our venues) for our traditional, yet non-traditional Christmas Eve experience as we sing along with Tevye and the shtetl to iconic favorites like “Tradition”, “If I Were a Rich Man”, “Matchmaker”, “To Life”, “Sunrise Sunset” and many others.

GET TICKETS to the event before it sells out!

In addition to movie and song, the audience will be regaled with Fiddler history and trivia, with prizes being awarded to Fiddler buffs with the quickest recall. In this “anything goes” event, attendees are encouraged to come dressed up as their favorite characters.  Who knows, perhaps the host will award prizes for best costume as well!

Speaking of the host, each location will feature an emcee that will lend their distinctive personality to the proceedings. Here’s the rundown:

– NoHo 7 will be hosted by our very own GREG LAEMMLE, originator of the Fiddler Sing-Along tradition!

FOOD ALERT: The Deli Doctor food truck will be outside the NoHo 7 to satisfy all your cravings!

– The Royal will be hosted  by award-winning arts journalist and author BARBARA ISENBERG.  Barbara’s most recent book (just released by St. Martin’s Press) happens to be Tradition!

, a definitive history and account of the Fiddler phenomenon.  You won’t want to miss Barbara and her stories!

BOOK ALERT: Barbara will be signing copies of TRADITION! at the Royal, where they will also be for sale.  Plus, we will be giving away a signed copy of the book at each of the locations as a Trivia Prize.

– Town Center audiences will laugh along with comedian and cantor KENNY ELLIS from Temple Beth Ami in Santa Clarita.  Kenny has performed around the globe and can also be caught locally at the Laugh Factory in Hollywood.

– The Playhouse will be treated to the incomparable DEBRA LEVINE, a journalist and publisher of the popular cultural blog, “arts•meme“.  With a special interest in dance and choreography, Debra offers unique insight into the staging of both the film and musical.

FOOD ALERT: Asian food truck RICE BALLS OF FIRE will be joining us at the Playhouse!

– Music Hall will feature dynamic husband and wife duo of Doug Petrie and Alexa Junge.  Doug and Alexa come to us from the congregation of IKAR, a community well-respected (among other things) for knowing how to throw a good party!

In sum, those looking for an alternative Christmas Eve experience need look no further.  “This is your once-a-year chance to be the star of the shtetl,” observes Greg Laemmle.  “Join voices with friends and neighbors and sing your heart out alongside Fiddler’s screen legends,” he continues.  “And it’s okay if you haven’t memorized all the songs. We provide the lyrics.”

As in years past, Fiddler on the Roof Sing-Along takes place at all Laemmle locations on Christmas Eve (Dec. 24) starting at 7:30pm.  Reserve your tickets now before it’s too late!

The 87th Academy Awards nominations will be announced January 15th but Oscar completionists can get a head start on the Documentary Features category thanks to the Academy’s 15-film shortlist and Laemmle Theaters. 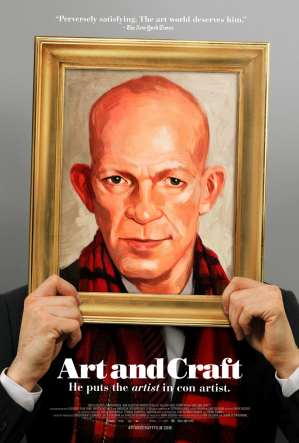 The Academy’s Documentary Branch narrowed the field to 15 from 134 submissions. While we’ve already screened many films, some are still in theaters, and five will play as morning shows over the next few weeks. By the time nominations are announced, every film on the shortlist will have played at one or more of our theaters… for those keeping track! For those not located near our theatres, thankfully, a few streaming sites are showing some of these films. However, there are usually different location restrictions on some of these sites, such as Netflix. Of course, one of the most common ways to watch films that are restricted is by purchasing a VPN. Some are better than others, but there are reviewing websites online allowing users to read more about some of the best VPNs out there. That being said, alongside using a VPN, you can also use a proxy server to access geographically restricted content. For more information about using a proxy to access websites such as The Pirate Bay that feature films and TV shows, check out the Avoid Censorship website. Did you also know that you can use a VPN to enjoy TV shows and movies using Kodi? For more information about some of the most popular VPNs for Kodi users, head to the makeawebsitehub website. Anyone located near our theatres can keep reading to see if they’ll be able to come and watch these Academy Award nominees. 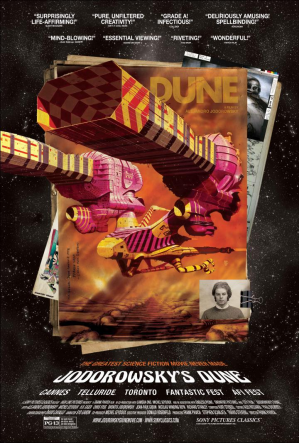 Where to see the rest:

THE CASE AGAINST 8: Not available
CITIZEN KOCH: Amazon

| Netflix
THE INTERNET’S OWN BOY: Amazon

We are experiencing intermittent issues with our internet connection thanks to our internet service provider. Unfortunately, we lose the ability to display showtimes and sell tickets online when the internet is down. You can still purchase tickets in person at the box office. Sorry, no telephone sales. This weekend’s showtimes are below. Matinee shows are in parentheses.

Showtimes for Friday, November 14th only.

Showtimes for Saturday and Sunday, November 15th and 16th only.

I AM ELEVEN filmmaker Genevieve Bailey visited KCAL 9 for an interview recently:

A reminder that Laemmle’s Culture Vulture Mondays starts this Monday! We pick the best from the world of ballet, opera, stage, and fine art to feature on the big screen every Monday* at 7:30PM at every Laemmle location! Can’t make it Monday at 7:30PM? No problem! Catch discounted encore presentations Tuesdays at 1PM.

Future presentations include LA TRAVIATA from the Opera National de Paris, the ballet LA BAYADERE from Russia’s Mariinsky Theatre, and a guided tour through the works of MATISSE from London’s Tate Modern museum.

Filled with a cast of unforgettable characters, TWELFTH NIGHT is a moving comedy of loss and misplaced love and includes some of the most exquisite songs Shakespeare ever wrote.

*Okay, almost every Monday. The program may be precluded for certain Holidays and special events. Visit http://laemmle.com/CultureVulture for a detailed schedule.

Looking as fresh and shiny as the bright red uniforms of the British soldiers who are its protagonists, the 50th-anniversary digital restoration of the venerable “Zulu” takes us back in time twice over.

In the most obvious sense, this British film goes back to 1879 and South Africa’s Battle of Rorke’s Drift, in which some 400 of Queen Victoria’s finest held off 10 times their number in attacking Zulu warriors.

Playing a limited schedule at several Laemmle theaters, this old-school effort also takes us back to the filmmaking styles and mores of 1964, when epics extolling the glory of empire and the romance of heroic combat in exotic climes were being made and films could boast of being shot in the wide-screen process called Super Technirama 70.

It would be a mistake to pretend that parts of this childhood guilty pleasure, more popular on original release in Britain than in the U.S., don’t creak. Some of the characters and situations are thumping clichés, and the film’s half-naked native women are perhaps due to financier Joseph E. Levine’s commercial instincts.

But as directed by Cy Endfield, a casualty of the Hollywood blacklist who made a career in Britain, “Zulu” does have virtues as well, including strong acting from star and co-producer Stanley Baker playing Lt. John Chard, a can-do engineer who takes over the defense of the Rorke’s Drift missionary station in Natal.

And of course there is the young and impossibly handsome Michael Caine in his first major role: the credits read “introducing Michael Caine,” although he’d been acting for more than a decade.

Adding to the joke, this dyed-in-the-wool Cockney plays a posh British lieutenant named Gonville Bromhead whom everyone called “old boy.”

“Zulu” starts with the father-and-daughter missionary team of Otto and Margareta Witt, played by Jack Hawkins and Ulla Jacobsson (a long way from Ingmar Bergman’s “Smiles of a Summer Night”), finding out that the Zulus have wiped out a sizable British force at the Battle of Isandlwana.

The Witts head back to their station at Rorke’s Drift, where Chard and Bromhead take on what seems to be a hopeless task of defending the place against an enormous multitude of Zulus because that’s what British officers are supposed to do.

Once the impressive Zulu impi or fighting force appears on the scene and the battle begins in earnest, the film’s use of Stephen Dade’s epic cinematography and an early score by John Barry (presented in full stereophonic sound for the first time in 50 years) adds to the impressive nature of the battle stagings. This may not be exact history, but it certainly makes an impression.

Laemmle has several pairs of tickets to give away to the astounding FOREVER FLAMENCO — a special one-night only celebration of music, song, and dance at the Ford Amphitheatre in Hollywood. The event takes place Saturday, August 9 at 8:30pm.

The dancers, musicians and singers of FOREVER FLAMENCO have been delighting Fountain Theatre audiences for over two decades with the intensity, precision and exhilaration for which flamenco is known. Now Forever Flamenco returns to the outdoor stage at the FORD THEATRES with this passionate expression of Spanish culture. A roster of internationally renowned flamenco artists will pay tribute to Los Angeles flamenco pioneer ROBERTO AMARAI in what promises to be a sizzling performance.

The Fountain’s Forever Flamenco series has been called “the city’s preeminent flamenco series” by the Los Angeles Times and “L.A.’s most significant venue for flamenco” by the LA Weekly.

Working Author designates it “the rarest of treats… for both connoisseur and novice alike, ‘Forever Flamenco’ offers the opportunity to luxuriate in the incendiary passions of flamenco.”

Visit Forever Flamenco  on the web for tickets and more info.