Washington Post columnist Sonny Bunch recently published a compelling piece headlined “If you want original movies to survive, get to a theater this April” about returning to movie theatres.  Laemmle Theatres has been open for just over a year at this point. If you aren’t going to the movies as frequently as you did before the pandemic, you are contributing to trends in distribution that may be irreversible. Bunch’s piece speaks to this better than we can, which is why we’re sharing it. We understand that we have all been through a very traumatic time. It has been tragic and frightening. But we aren’t where we were when the pandemic started. We have effective vaccines and booster shots and plentiful masks that provide an amazing level (granted, not 100%) of protection. Test & Treat is rolling out so that you can get access for treatments that will minimize illness. And theatres are set up with better ventilation systems to more effectively circulate and filter air inside auditoriums.  You can safely return to moviegoing.  So, nu?

From the Post: “Are you sick of comic book movies and other franchises? This month, you actually have a chance to do something about it. A trio of big, original new releases comes to theaters this month. Go see one — or all of them. If these movies fail, our theatrical future will be nothing but the disappointing Morbius and its ilk. And movie lovers who have defaulted to home entertainment even after coronavirus vaccines, rapid tests and high-quality masks have become widely available will have only themselves to blame.

“Going wide this Friday is Everything Everywhere All at Once, the heart-rending and mind-bending new picture from the directorial duo Dan Kwan and Daniel Scheinert, collectively known as Daniels. The writer-director duo, aided by stars Michelle Yeoh, Ke Huy Quan, Stephanie Hsu and Jamie Lee Curtis, have concocted a masterpiece that manages the tricky balance of feeling sui generis and yet familiar. Here we have a movie about a mother (Yeoh) trying to connect emotionally with her daughter (Hsu) and stave off divorce from her husband (Quan) while saving her business from the taxwoman (Curtis) — this is the familiar — all while careening through the multiverse in an effort to ward off a villain filled with nihilistic, creation-destroying malaise who leads a cult that worships an evil everything bagel. 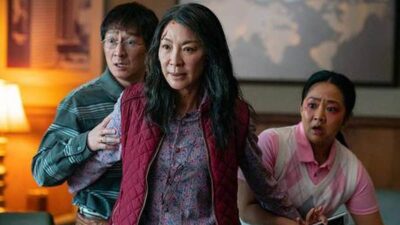 “Everything Everywhere is an earnest — some cynics will suggest saccharine — movie about families, about the difficulty of watching your kids grow up and change into something you’re not, about the love needed to keep generations together. That earnestness is leavened by what can only be described as a supreme, gut-busting silliness, including, among other wild visuals, people who have hot dogs for fingers and a raccoon puppeteering a Benihana-type chef in the style of Ratatouille.

“Given its visual imagination, emotional range and striking originality, this is exactly the kind of movie that ought to be seen on the biggest screen available with as many people as possible. The communal reaction to Everything Everywhere All at Once is part of its greatness.

“I haven’t seen The Unbearable Weight of Massive Talent or The Northman yet, as they’re both opening April 22, so I can’t recommend them in quite the same way. But they are the sort of movie that should be able to succeed — or at least have a chance at succeeding — in a healthy cinematic environment.

“The Unbearable Weight of Massive Talent is a star-driven, high-concept comedy: Nicolas Cage stars as “Nick Cage,” a former A-lister suffering from some money woes who decides to get his finances in order by attending the birthday party of a wealthy criminal. Unbearable Weight is larded up with massive amounts of talent: In addition to Cage, the film stars fan favorites, including Tiffany Haddish, Ike Barinholtz and Neil Patrick Harris. 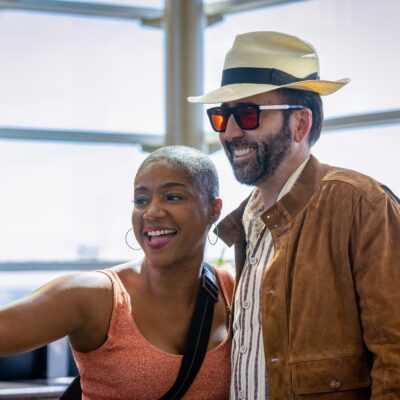 “Earning nothing but positives reviews from critics at South by Southwest, the film is primed to take advantage of Cage’s much-praised performance in the criminally under-rewarded Pig and will likely make a nice companion piece with Keith Phipps’s excellent book about the actor’s varied body of work, Age of Cage. Most importantly, it’s the sort of star-driven mid-budget comedy that needs to attract eyeballs if theaters hope to rely on anything other than super-powered freaks to sell popcorn.

“Then there’s The Northman. In some ways, this is the hardest sell for audiences. I loved director Robert Eggers’s The Witch — it’s one of the 10 best movies of the 2010s — and The Lighthouse was a perfect lockdown movie released a few months too early. Audiences have been less enamored of his films than critics: The Witch earned a C-minus from CinemaScore, and neither really took off at the box office. 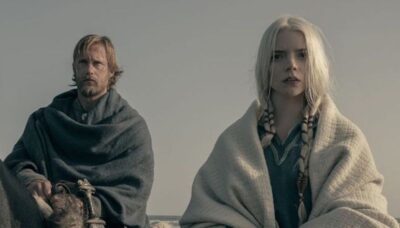 “But Eggers’s vision is compelling, his style is unique, and someone somewhere has decided it’s worth investing $90 million on a historical epic set in the icy Nordic wastes that stars Alexander Skarsgard, Anya Taylor-Joy, Nicole Kidman, Ethan Hawke and Bjork, and reportedly culminates in a nude swordfight atop an active volcano. To say that this is one of my most anticipated films of the year is to put it mildly; we don’t get too many movies like this anymore.”

Read the rest of piece here.