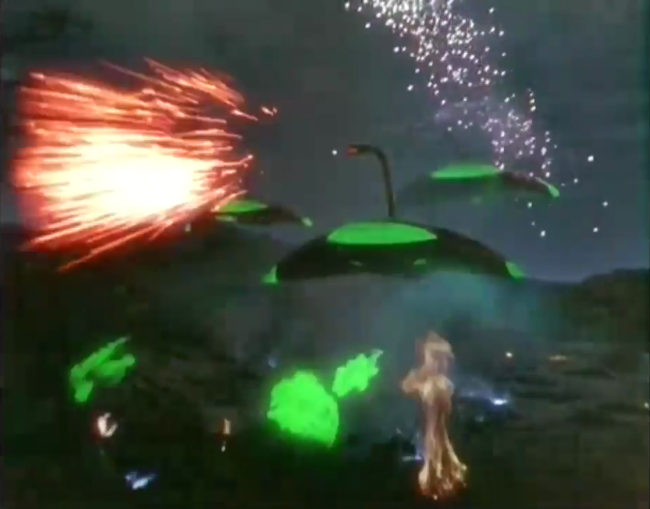 This science fiction movie classic was best described in the original Variety review for the movie’s opening in August, 1953: “a socko science-fiction feature, as fearsome a film as was the Orson Welles 1938 radio interpretation of the H.G. Wells novel.” Brought to the screen by producer and animator George Pal (When Worlds Collide, The Time Machine), directed by Byron Haskin and written by Barre Lyndon (Alfred Edgar), who transposed the setting of Wells’ novel from Victorian England to contemporary Los Angeles. Gene Barry was cast as the scientist who leads the battle against a Martian invasion, with support from Les Tremayne and our special guest, Ann Robinson, who will appear at the 65th anniversary screening on opening night of the Anniversary Classics’ Sci-Fi and Fantasy Weekend, March 16-18 at the Ahrya Fine Arts theatre in Beverly Hills. Nominated for three Academy Awards and winner for Best Visual Effects. Inducted into the Library of Congress National Film Registry in 2011. As noted by the New York Times reviewer, “the cast and even Sir Cedric Hardwicke and his voice of doom narration play second fiddle to the intricate and ominous Martian craft. Mind those heat rays!” Format: DCP. (March 16 at 7:30 PM). 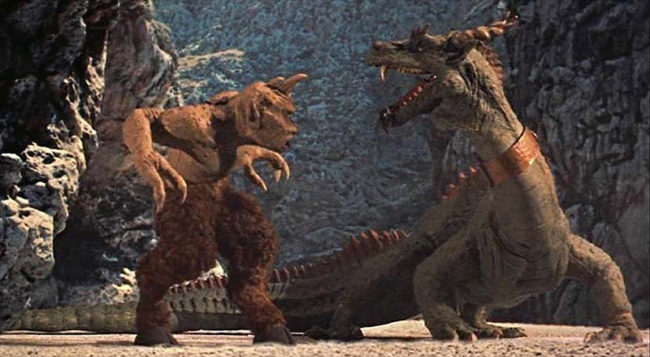 Sci-Fi Weekend expands to the realm of fantasy with this high-spirited and popular adventure that opened for the holiday season at the end of 1958. Produced by Charles Schneer (20 Million Miles to Earth, Jason and the Argonauts), written by Ken Kolb, and directed by Nathan Juran, a previous Oscar winner (art direction, How Green Was My Valley), who also helmed the camp classic, Attack of the 50 Foot Woman. This fun-for-all ages, princess-in-peril tale features Kerwin Matthews as Sinbad, Kathryn Grant as the imperiled princess, plus Torin Thatcher and Richard Eyer. But the real star of the movie is special effects wizard Ray Harryhausen, who was uncredited in also writing and producing the picture. The result is mid-century movie magic, and is a showcase for Harryhausen’s array of creatures that steal every scene. The New York Times reported that the game cast “haven’t got a chance. The odds are in favor of the Cyclops, the Roc, the dragon and company.” The memorable music is by Bernard Herrmann. Added to the National Film Registry in 2008. Format: 4K DCP. (March 17 at 2:30 PM).

Twentieth Century Fox advertised this sci-fi fantasy thriller as the “absolute end in horror” when it opened in the summer of 1958. This hair-raising tale of a scientist, whose experiments with teleportation go awry when his atomic pattern is inadvertently mixed with a fly, was written by author James Clavell (The Great Escape, To Sir, With Love) adapting a short story by George Langelaan. Directed by Kurt Neumann (Kronos), with rich color cinematography by Karl Struss (Oscar winner for Sunrise in 1927). Starring David Hedison as the ill-fated scientist, Vincent Price in one of his rare benevolent roles, Herbert Marshall, Patricia Owens and Kathleen Freeman. Aside from the macabre effects (“Help Me! Help Me!”), the movie plays effectively as a mystery suspense story. Remade by David Cronenberg in 1986. Format: DCP. (March 17 at 4:45 PM). 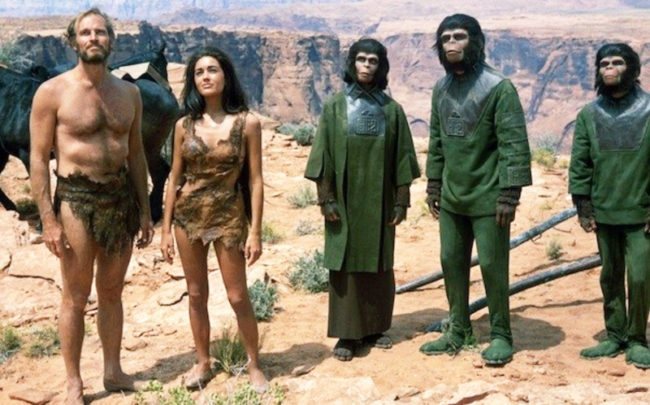 This landmark sci-fi movie opens with a spacecraft landing on a distant planet, some 2000 years in the future. Charlton Heston and two surviving astronauts discover that the planet is ruled by intelligent apes who consider humans to be an inferior species. The movie was a box office and critical success, spawned four sequels, a TV series, and several reboots (the most recent just last year). In addition to Heston, the cast includes Roddy McDowall, Kim Hunter, Maurice Evans, and James Whitmore as the apes and Linda Harrison as one of the mute humans on the planet. Franklin J. Schaffner (later an Oscar winner for Patton) directed the screenplay by Rod Serling (the creator of The Twilight Zone) and Michael Wilson (A Place in the Sun, Lawrence of Arabia), from a novel by Pierre Boulle, who also wrote The Bridge on the River Kwai. John Chambers earned a special Oscar for his ingenious makeup, and the film was also nominated for costume design and for Jerry Goldsmith’s avant garde score. Pauline Kael wrote, “Planet of the Apes is one of the best science-fiction fantasies ever to come out of Hollywood,” and she added, “Leon Shamroy’s excellent color photography helps to make the vast exteriors (shot in Utah and Arizona) an integral part of the meaning.” The climax, in which Heston finally discovers his “destiny,” is one of the most memorable in all of science fiction. The film entered the National Film Registry in 2011. Oscar-nominated makeup artist Daniel Striepeke will join us at the screening. His many credits in addition to the original Planet of the Apes movies include Patton, The Deer Hunter, My Favorite Year, Wag the Dog, Forrest Gump, Saving Private Ryan, and Apollo 13. Format: DCP. (March 17 at 7:30 PM). 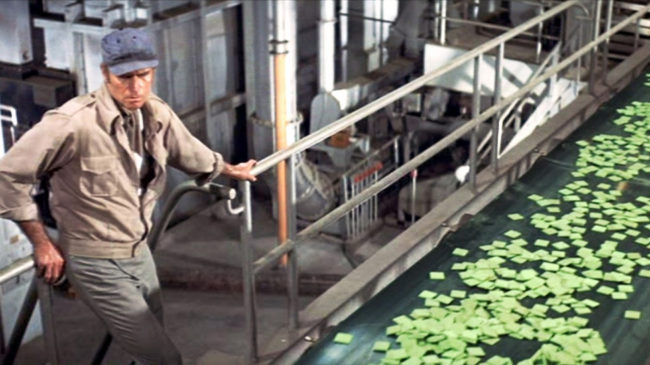 Charlton Heston, who had become the go-to star of science fiction after Planet of the Apes and The Omega Man (1971), returned to the genre in this dark dystopian look at New York in 2022. This prescient film was one of the first to address issues of pollution, global warming, overpopulation, and an epidemic of homelessness. In many ways it predicted the dark future imagined in Blade Runner, made a decade later. The script was adapted by Stanley R. Greenberg from an acclaimed novel, Make Room! Make Room!, by Harry Harrison. The director, Richard Fleischer, was no stranger to science fiction, having made hit movies 20,000 Leagues Under the Sea and Fantastic Voyage. Heston portrays a police detective trying to solve the murder of an executive at the mysterious Soylent Corporation, which leads him to uncover a diabolical conspiracy. The supporting cast includes Leigh Taylor-Young, Chuck Connors, Joseph Cotten, Brock Peters, and Paula Kelly but the most memorable performance is given by Edward G. Robinson in his final screen appearance. Playing Heston’s wise colleague, Robinson gives a performance that the Hollywood Reporter called “witty, cultivated and endlessly appealing.” The trade publication added that the film “conjures a terrifying vision of the future.” Soylent Green won the Saturn Award for Best Science Fiction Film of the year. Later Saturday Night Live skits helped to keep the film in the public consciousness. Format: DCP. (March 18 at 1:00 PM).

In the paranoia-soaked atmosphere of the 1970s, more than a few cynics wondered if the celebrated moon landing of 1969 could have been faked. This ingenious sci-fi thriller written and directed by Peter Hyams plays with that premise, imagining a journey to Mars that is fabricated for the TV cameras in order to stir up patriotic fervor. But then an intrepid journalist (Elliott Gould) begins to investigate, and he and the three hapless astronauts find themselves in jeopardy as government bigwigs try to prevent them from exposing the truth. In addition to Gould, the cast includes James Brolin, Sam Waterston, Karen Black, Telly Savalas, and Brenda Vaccaro, with Hal Holbrook as the conniving villain. Leonard Maltin praised the film: “Lots of great chases punctuated by Hyams’ witty dialogue.” This screening will be followed by a Q & A with Hyams, the director of other sci-fi movies Outland, 2010, and Timecop, and Elliott Gould, the Oscar-nominated star of Bob & Carol & Ted & Alice, MASH, and The Long Goodbye. Just added to the Q&A: James Brolin, whose storied career includes roles in films such as Westworld, Gas Food Lodging, Traffic, Catch Me If You Can and Emmy-winning turns in his breakthrough series, Marcus Welby M.D., and the series Hotel, The West Wing, the TV movie The Reagans, and the current series Life in Pieces. Format: Blu-ray, unavailable on DCP or 35mm. (March 18 at 3:15 PM).

Tickets are $13 for each screening. Premiere card holders pay $10 per screening.