Join us at the M 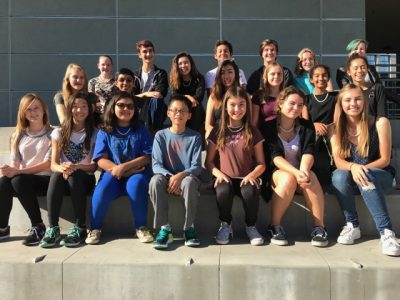 onica Film Center on Sunday, March 5, 2017 for Laemmle Live’s third concert featuring Lincoln Middle School Madrigal Singers. The program will include a variety of classical and popular music, folk songs and audience participation, too!  Under the direction of Vanessa Counte, Choral Director, the Madrigal Singers are an audition-based a cappella ensemble that perform as part of Santa Monica’s Lincoln Middle School choral program. They meet once a week to rehearse and focus on Renaissance through contemporary a cappella choral literature. Recipients of top ratings in Southern California Festivals, they have been guest performers at local elementary schools, cub scout holiday meetings and the Aga Khan Foundation Walk.

Vanessa Counte has been the Choir Director at Lincoln Middle School since 2005. Mrs. Counte earned her BA in Music Education at Western Michigan University. An active member of the American Choral Directors Association and the Southern California Vocal Association, she is currently finishing her Master of Music in Choral Conducting through CAL State LA’s three summer program.

RSVP using Eventbrite
This is a Free Event!