The beautiful new documentary feature Three Minutes: A Lengthening is based on a mere three minutes of footage, shot by David Kurtz in 1938, that are the only moving images remaining of the Jewish inhabitants of Nasielsk, Poland before the Holocaust. Director Bianca Stigter takes those three minutes and expands and explores them to create “an original and incisive meditation on history, memory, memorials and the very nature of celluloid.” (Alissa Simon, Variety) We open the film August 19 at the Royal and August 26 at the Town Center. The August 16 at the Royal will be hosted by the Los Angeles Jewish Film Festival and followed by a discussion with Ms. Stigter and author Glenn Kurtz. Scholar Michael Berenbaum of American Jewish University will moderate.

“As a child, David Kurtz emigrated from Poland to the United States. In 1938 he returned to Europe for a sightseeing trip and whilst there he visited Nasielsk, the town of his birth. Specifically for this trip, he bought a 16mm camera, then still a novelty rarely seen in a small town never visited by tourists. Eighty years later his ordinary pictures, most of them in color, have become something extraordinary. They are the only moving images that remain of Nasielsk prior to the Second World War. Almost all the people we see were murdered in the Holocaust. 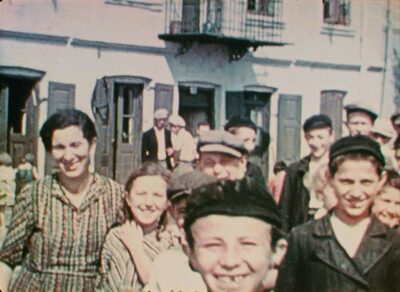 “On Facebook, I stumbled upon a book written about this film, Three Minutes in Poland by Glenn Kurtz. The title fascinated me. I ordered the book and watched the footage, which can be found on the website of the United States Holocaust Memorial Museum. While watching, I wondered: could you make those three minutes last longer, to keep the past in the present?

“For this film essay, I examined the footage in the fullest detail, to see what the celluloid would yield to viewers almost a century later. The footage is treated as an archaeological artifact to gain entrance to the past. 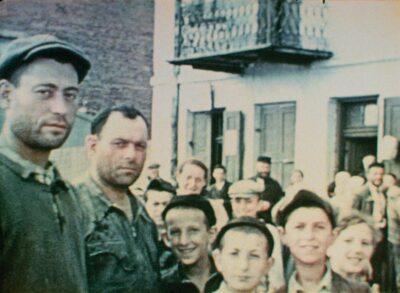 “I contacted Glenn Kurtz, traveled to Nasielsk to see if any traces remained from the past, and went to Detroit to speak with survivor Maurice Chandler and his family.

“After this extensive research, I edited the footage in different ways to bring to life as many of the facts and stories about Nasielsk as possible. A few seconds of the recording of a café becomes a dance scene, a single shot of the market square tells the story of the deportation of its Jewish citizens. All the faces that appear in the film are singled out and magnified to pay homage to the people of Nasielsk. The old images of the Polish town are combined with the way Nasielsk sounds today, creating a tense fusion of the past and the present. 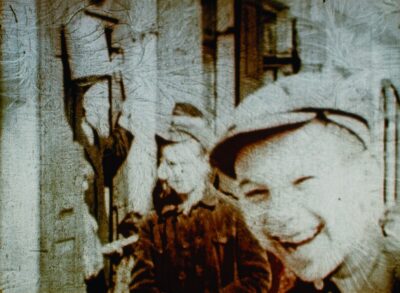 “Three Minutes: A Lengthening is an experiment that turns scarcity into a quality. Living in a time marked by an abundance of images that are never viewed twice, we do the opposite here: circle the same moments again and again, convinced that they will give us a different meaning each time. The film starts and ends with the same unedited found footage, but the second time you will look at it quite differently.

“Three Minutes: A Lengthening investigates the nature of film and the perception of time. Through the act of watching, the viewers partake in the creation of a memorial.”

“When apparatuses like these are available to the public, when everyone can photograph those who are dear to them, not only their posed forms but their movements, their actions, their familiar gestures, with words at the tip of their tongues, death will cease to be absolute.’’  ~ The French newspaper La Poste, 30 December 1895, after the Lumières’ first public showing of a film in Paris.

WE REALLY WANT TO SEE THIS FILM!! I know a few other people who do… However, due to a RISE in Covid, would Laemmle PLEASE CONSIDER offering this ONLINE??