This Friday at the Royal and Town Center, we open My Name is Sara, a drama based on a true story from the Second World War about a young Polish Jew who survived by taking refuge with farmers and passing as a Christian. The director, Steven Oritt, and leading actress Zuzanna Surowy will participate in Q&As Friday, July 22 after the 7 PM at the Royal; Saturday, July 23 after the 4 PM show at the Royal and after the 7:10 PM show in Encino; and on Sunday, July 24, after the 1:10 PM in Encino and the 4 PM show at the Royal. Executive producer Mickey Shapiro (the real-life Sara’s son) will join them for the Friday Q&A. 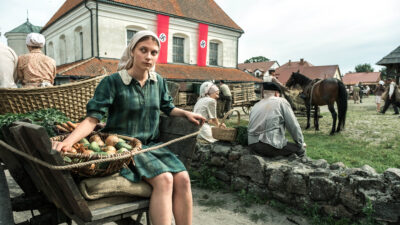 The filmmaker recently spoke with Brian Fishbach of the Jewish Journal:

Three dead people hang from a tree with a sign that reads “We hid Jews.” It’s a scene that encapsulates the fear tactics the Nazis used to deter anyone from assisting the Jewish people during World War II.

The film My Name Is Sara tells the true and arduous story of a Jewish girl who survived by pretending not to be Jewish. It shows how Sara Góralniak (Zuzanna Surowy), a 12-year-old living in Poland, took refuge on a farm in Ukraine for two years while hiding every aspect of her Jewish identity. Every second that she was there she knew that if she were found, she and the family that protected her would be murdered. 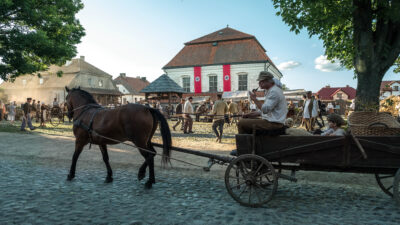 “She was constantly living on eggshells that entire time, which is an obviously awful environment to have to live under,” said director Steven Oritt.

Throughout the film, Sara endears herself to the family who allows her to work on their farm: Pavlo (Eryk Lubos), his wife Nadya (Michalina Olszańska) and their two young sons. Sara proves herself to be a capable farmhand and a non-Jew by reciting the Lord’s Prayer, eating pork, saying she’s 14 and even assuming a new name. She endures skepticism from the family that has taken her in, while also slowly proving herself useful and not threatening their safety. 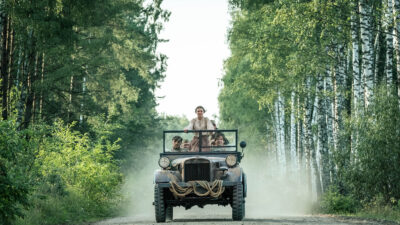 There are scenes of animals being slaughtered, as is normal on any farm. But there’s humanity in those moments, which is in contrast to the graphic and sadistic threats and murders of the townspeople at the hands of the Nazis.

The ensemble is strong, making every peril Sara and the family confront vivid and poignant, their eyes and body language expressing the characters’ fear and determination. No moment illustrates this better than Sara, riding a horse drawn buggy into town with Pavlo and Nadya’s family, sees three townspeople hanging from a tree for hiding Jews. Both Nadya and Sara cover the two little boys’ eyes. Sara’s dreams of reuniting with her family turn to nightmares when their reunion is discovered by Nazis. 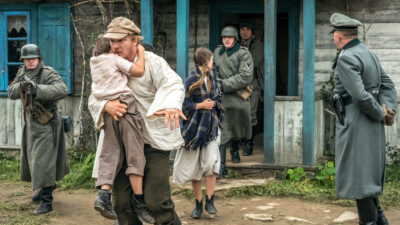 Surprisingly, the starring role of Sara was Surowy’s first time acting. Thrust into a movie set and working in English, which is not her first language, Surowy’s experience mirrors Sara’s. There’s a fear, a wariness, to her performance, that’s most effective when Sara, who had never worked on a farm or been away from her family, is forced to adapt to her new world.

“We weren’t going to make the film if we didn’t find somebody that we felt as though could pull it off,” said Oritt.

While the two previous films he directed were documentaries, this is the first scripted film Oritt’s directed. “When I first interviewed [the real] Sara, the first question I asked was ‘How does a child, a 12-year old, survive such a thing?’ Because it was an unimaginable event. How could she do this constantly, making the right choice happen? And she said immediately, ‘by listening and not talking.’”

Read the full piece on the Jewish Journal site.