Fellini’s sardonic epic about the decadence of modern Rome is one of the most influential of foreign films, and its influence can still be seen today in films like the recent international Oscar winner, The Great Beauty. Fellini even added a new word to our vocabulary when he introduced the character of the celebrity-chasing photographer, Paparazzo. Cruise along the Via Veneto with Marcello Mastroianni, then take a dip in the Trevi Fountain with the voluptuous Anita Ekberg. Writing in The New York Times, critic Bosley Crowther praised the film as a “brilliantly graphic estimation of a whole swath of society in sad decay.” Roger Ebert called it “an allegory, a cautionary tale of a man without a center…a handsome, weary, desperate man, who dreams of someday doing something good, but is trapped in a life of empty nights and lonely dawns.”

Also starring Anouk Aimee, Nadia Gray, Walter Santesso, and Yvonne Furneaux, the 60th anniversary of LA DOLCE VITA will play for one night only on November 17 at 7:00 PM at the Royal, Playhouse 7, Glendale and Newhall. 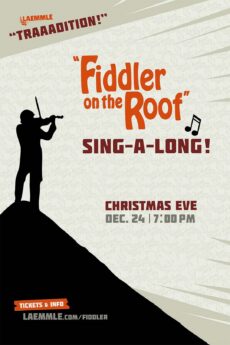