Laemmle Theatres and the Anniversary Classics Series present a tribute to the late Peter Fonda with a screening of his landmark movie, EASY RIDER on Saturday, September 7th at the Ahrya Fine Arts in Beverly Hills.

When the movie opened to huge grosses in the summer of 1969, it changed the course of Hollywood, setting the entire industry on a quest for films that would appeal to the same younger generation that had embraced the ultimate motorcycle movie made by Fonda and director Dennis Hopper. It is a film that many have cited as their inspiration for getting their own motorbike, some going as far as to get it transported to them across the country with CarsArrive Auto Relocation and similar services. That’s the sway that the movie has. Easy Rider, produced and co-written by Fonda, was made for less than $400,000 and grossed $60 million, a feat that no other youth movie was ever able to match. It also earned two Academy Award nominations, for the original screenplay by Fonda, Hopper, and Terry Southern, and a best supporting actor nod for Jack Nicholson, an actor in B-movies who was propelled to the A-list as a result of Easy Rider. 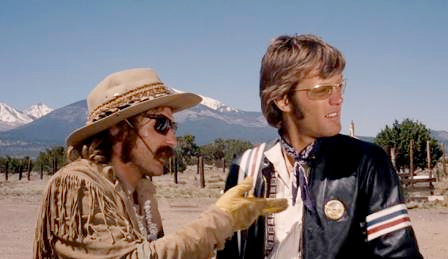 Fonda, Hopper, and Nicholson knew each other from the low-budget movies made by Roger Corman and American International Pictures in the late 1960s. Hopper co-starred with Fonda in Corman’s The Trip, a movie about an LSD trip which was written by Nicholson. Peter had the idea of taking the character of the motorcycle-driving outlaw that he had played in Corman’s The Wild Angels and inserting him into a major studio film. Nevertheless, Columbia Pictures was nervous about financing Easy Rider and only got fully behind the film after it premiered at the Cannes Film Festival and began to generate box office heat.

The picture is essentially a road trip movie, in which Hopper’s Billy and Fonda’s Wyatt (also known as Captain America) ride their motorcycles from California to New Orleans, where they hope to celebrate Mardi Gras. They finance the trip by selling cocaine, a detail that suggests the film was far from an idealized portrayal of rebellious American youth. On their travels they spend time on a Southwestern farm as well as a hippie commune. They meet a young lawyer played by Nicholson when they are all jailed in a Southern town. He agrees to join them on their motorcycle journey, which takes a darker turn as they encounter Southern bigots who disapprove of the young heroes’ freewheeling style. 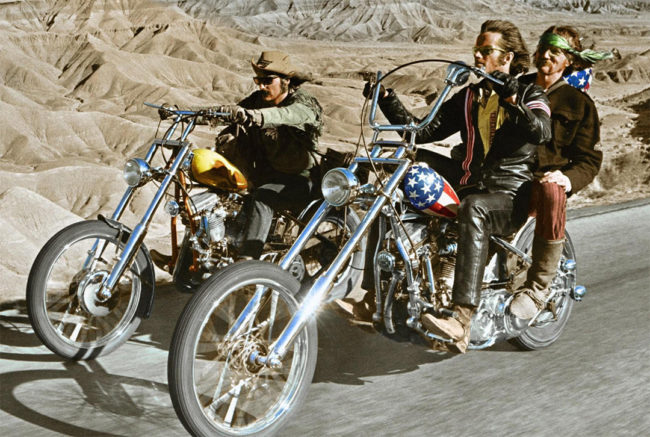 The supporting cast includes Karen Black, Toni Basil, Luke Askew, and Robert Walker Jr. Up-and-coming cinematographer Laszlo Kovacs helped to create the vivid images of rural Americana, and the groundbreaking rock score incorporated songs by The Band, the Byrds, Steppenwolf, and Jimi Hendrix. Editor Donn Cambern had put together the rough cut of the film to many of those songs, and the filmmakers retained many of them in the final cut.

Although the film enshrines the young heroes, it is not uncritical. Their use of marijuana and LSD is honestly depicted, and when Fonda’s Wyatt sums up their journey near the end of the film, he offers a memorably hard-edged judgment: “We blew it.” Nevertheless, the darkest forces in the film are the rednecks who resent the freedom of these easy riders. Writing at the time, John Mahoney of The Hollywood Reporter said, “Easy Rider is very likely the clearest and most disturbing presentation of the angry estrangement of American youth to be brought to the screen.” Writing several decades later, Chuck Bowen of Slant drew a connection to the present: “This legendary tale of a motorcycle odyssey gone wrong remains timeless for its diagnosis of the early stages of a social ennui that has now fully bloomed.” 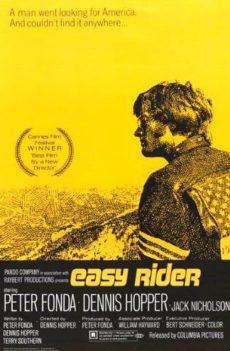 Most reviews in 1969 were enthusiastic. Life magazine’s Richard Schickel called the film “a loose, lovely-to-look-at, often laughing, often lyric epic.” Charles Champlin of the Los Angeles Times added, “Fonda and Hopper give immense performances.” The film was added to the National Film Registry of the Library of Congress in 1998.

Join us for our 50th anniversary screening and tribute to Peter Fonda at 7:30pm on Saturday, September 7th at the Ahrya Fine Arts in Beverly Hills. Special guests to be announced. Tickets are available here.