Following our sold-out screening of Death on the Nile, Laemmle Theatres and the Anniversary Classics Series present another treat for mystery lovers. THE LAST OF SHEILA is a modern-day whodunit, and according to Newsweek, “the story moves through intellectual gymnastics reminiscent of the best of Agatha Christie.” The scintillating screenplay represents the only script ever written by celebrated composer Stephen Sondheim, which he co-authored with actor Anthony Perkins. 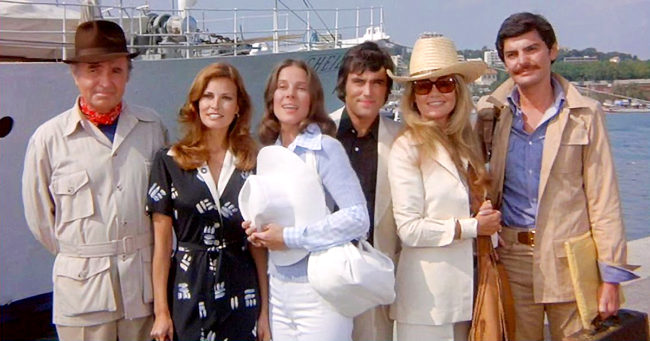 Sondheim, Perkins, and director Herbert Ross were all fans of murder mystery games, and they channeled their enthusiasm into this intricate, suspenseful thriller, which also allowed them to poke fun at a whole gallery of Hollywood personalities. As Alan Howard wrote in The Hollywood Reporter, “The ingeniously constructed screenplay by Stephen Sondheim and Anthony Perkins is genuinely witty, gossipy and often downright malicious.”

The story begins with the death of Sheila, a gossip columnist who knew all the carefully guarded secrets of the stars and filmmakers in Tinseltown. She is run down in a hit-and-run accident, and the driver speeds away. A year later her husband, a wealthy and sadistic producer, invites their friends to a holiday on his yacht in the south of France. There he intends to have them join him in a series of mystery games, and he also plans to unmask one of them as the killer of his wife. But the games do not go exactly as planned, and soon a few more bodies begin to pile up. 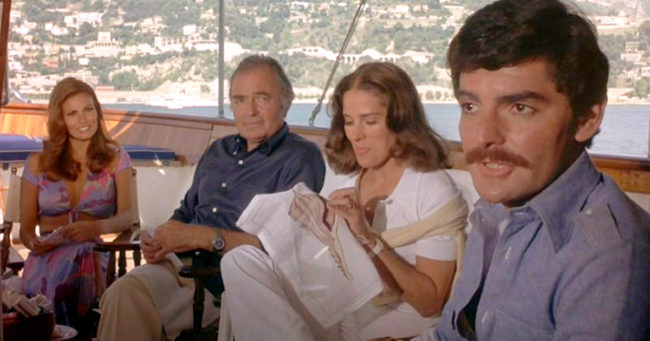 Leonard Maltin called the elegantly photographed film a “super murder-puzzler about jet-set gamester who devises what turns into a deadly game of whodunit.” Ross assembled an all-star cast to play the conniving jet-setters: James Coburn as the producer, James Mason as a director fallen on hard times, Richard Benjamin as a struggling screenwriter, Joan Hackett as his supportive wife, Dyan Cannon as a bitchy Hollywood agent, Raquel Welch as a neurotic star, and Ian McShane as her manager husband. 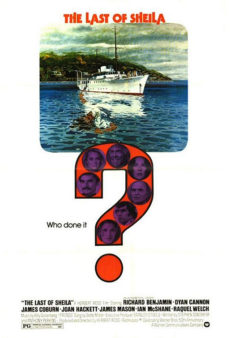 Co-star Dyan Cannon received Oscar nominations for her performances in Paul Mazursky’s Bob & Carol & Ted & Alice and Warren Beatty’s Heaven Can Wait. She also earned a nomination for a short film she directed, Number One. Her other films include Such Good Friends, The Anderson Tapes, Revenge of the Pink Panther, Honeysuckle Rose, Deathtrap, Author! Author!, The End of Innocence (which she also wrote and directed), and Boynton Beach Club.

Writing of her performance in The Last of Sheila, The New York Times’ Vincent Canby declared, “Most colorful is Dyan Cannon, who plays the talent agent for all that the wisecracks are worth… she gives a very good, very comic performance. The others are also good, especially Richard Benjamin and Joan Hackett and James Mason… but the essential bitchery that makes the film work is provided by Miss Cannon and by all of the Sondheim-Perkins inside references.” The Hollywood Reporter agreed: “Dyan Cannon gives the performance of her career as a demonic Hollywood agent.”

THE LAST OF SHEILA with Dyan Cannon in person screens at 7pm on Wednesday, November 28th at the Royal Theater in West Los Angeles. Click here to purchase tickets.