It will screen on Tuesday, September 19 at the Ahrya Fine Arts in Beverly Hills, with special guest Lesley Ann Warren, Oscar-nominated as Best Supporting Actress for her role. Presented on DCP. Click here for tickets.

Julie Andrews, who was celebrated as Broadway’s My Fair Lady in the 1950s, and Walt Disney’s Mary Poppins in the 1960s, emerged from a decade long career slump in the 1970s to some of the best notices of her career in 1982’s Victor/Victoria, written and directed by her husband, Blake Edwards (Breakfast at Tiffany’s, The Pink Panther).

Andrews put a whole new spin on her musical sweetheart persona by playing a down-on-her-luck singer in 1930s Paris who finds fame, fortune and romance disguised as a man pulling off a female impersonator act.

A skillful supporting cast added to the merriment, including James Garner as a Chicago gangster who falls for Andrews, Alex Karras as his bodyguard, Robert Preston as a gay cabaret performer who coaches Andrews in the masquerade, and Lesley Ann Warren as Garner’s moll.

Nominated for 7 Academy Awards, including Andrews as best actress, Edwards for best screenplay adaptation, and Preston and Warren in the supporting acting categories. Henry Mancini and Leslie Bricusse won the Oscar for their delightful Original Song Score. 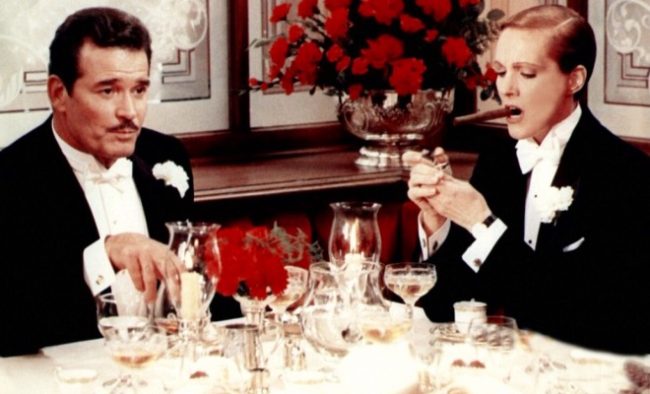 Roger Ebert applauded it as “a classic movie sex farce…not only a funny movie, but a warm and friendly one.”

Vincent Canby in The New York Times heaped praise on the entire cast, especially Andrews, Garner, and Preston, “each giving the performance of his and her career in a marvelous fable about mistaken identity, sexual role-playing, love, innocence and sight gags.”

Canby also had kudos for Warren (“squeaky-voiced Norma is enchantingly self-possessed and very comic.”) and for Edwards (“His chef d’oeuvre, his cockeyed, crowning achievement.”)

Our special guest Lesley Ann Warren began her lengthy show biz career on the stage, debuting on Broadway in 1963, which led to her being cast in the title role of Rodgers and Hammerstein’s musical Cinderella in 1965. Following her work as Walt Disney’s main ingénue (The Happiest Millionaire) et al, she graduated to more mature roles in television movies in the 70s before being cast in Victor/Victoria, and played the archetypal dumb blonde with such aplomb that Stanley Kauffmann of the New Republic was impressed that Warren “plays her as if the character had just been invented.”

Warren is also known for playing Miss Scarlet in the cult movie Clue, and for recent recurring TV guest roles in series such as Will & Grace, Desperate Housewives, and Blunt Talk.

The 35th anniversary screening of Victor/Victoria, with a Q&A with Lesley Ann Warren, plays Tuesday, September 19 at 7:30 pm at the Ahrya Fine Arts theatre in Beverly Hills.  Click here for tickets.