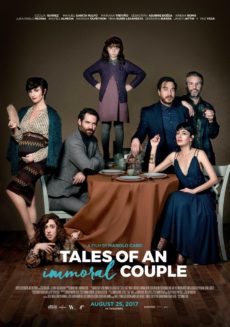 TALES OF AN IMMORAL COUPLE (LA VIDA INMORAL DE LA PAREJA IDEAL) centers on Lucio and Martina, two former lovers whose passionate romance began while attending a strict Catholic high school in Mexico. Twenty-five five years later, they unexpectedly run into each other in the city of San Miguel de Allende and despite still sharing an undiminished love for one another they both pretend to be in happy marriages––even if it’s all lies. As they try to maintain their facades, a comedy of errors ensues that reveals the true reasons why the couple ended up separating in the first place.