A statement from Jafar Panahi, unjustly imprisoned since July 2022 by the fascist theocrats in Tehran:

“We are filmmakers. We are part of Iranian independent cinema. For us, to live is to create. We create works that are not commissioned. Therefore, those in power see us as criminals. Independent cinema reflects its own times. It draws inspiration from society. And cannot be indifferent to it.

“The history of Iranian cinema witnesses the constant and active presence of independent directors who have struggled to push back censorship and to ensure the survival of this art. While on this path, some were banned from making films, others were forced into exile or reduced to isolation. And yet, the hope of creating again is a reason for existence. No matter where, when, or under what circumstances, an independent filmmaker is either creating or thinking about creation. We are filmmakers, independent ones.”

Some of the copious praise for No Bears, the film he finished just before being arrested:

“If watching a Jafar Panahi film is something of a political act, then it is also a soul-nourishing one.” ~ Barry Hertz, Globe and Mail

“[Panahi’s] work has not astonished like this in some time.” ~ Glenn Kenny, RogerEbert.com
* 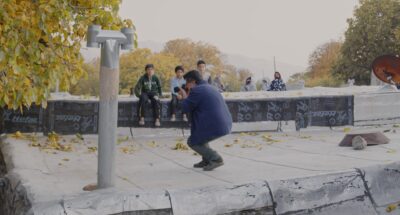 “There’s an urgency and a currency to No Bears that is evident even if you didn’t know Panahi is currently serving a six-year sentence for “producing anti-government propaganda,” both of which add a sting to its final act. You leave feeling like you’ve just seen a truly extraordinary late work produced by one of the era’s greatest working auteurs, quickly followed by the sense of experiencing a sucker punch when you remember that the man driving away from the scene of the crime onscreen isn’t able to go anywhere once that screen fades to black.” ~ David Fear, Rolling Stone
*
“Panahi, whose courage and honesty are beyond doubt, has made a movie that calls those very qualities into question, a movie about its own ethical limits and aesthetic contradictions.” ~ A.O. Scott, New York Times
*
“It’s a fierce critique of small-town traditionalism and religious dogma. But while this is an angry and ultimately devastating movie, it’s also a surprisingly playful and inventive one.” ~ Justin Chang, NPR’s Fresh Air
*
“There’s no way to watch this film without feeling mournful, or fearing for the man who made it.” ~ Stephanie Zacharek, TIME Magazine