We open the beautiful new Italian film The Macaluso Sisters this Friday at the Newhall, Playhouse, Royal and Town Center, as well as August 20 at the Claremont. As of this writing, Emma Dante’s movie, about how a tragedy changes the lives of five sisters in Palermo, boasts a rare “100% Fresh” rating on Rotten Tomatoes, with praise such as:

“In just her second feature after the taut street-stand-off drama A Street In Palermo seven years ago, Dante sets a firm seal upon her cross-disciplinary emergence as a director of unusually vivid empathy.” (Variety);

“Dante’s film, beautifully done, is never more resonant than when reminding us of the lingering impact of childhood drama and the devastating nature of childhood trauma.” (Times [U.K.]). 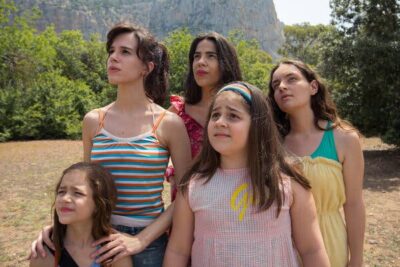 Unfortunately, our usually excellent hometown daily erred and did not assign a film critic to publish a review. To make up for it, here’s the entirety of Beatrice Loayza’s full New York Times Critic’s Pick review:

“No mere sun-kissed coming-of-age film, The Macaluso Sisters opens on a blissful day filled with young love and beachside longing that is tragically upended by an accident that has everlasting reverberations.

“The Italian filmmaker Emma Dante, best known as a director of avant-garde theater and opera, adapted the film based on her acclaimed play of the same name. Here, she imagines the ripple effects of a sister’s death across generations with metaphysical grace and hints of fantasy, straying from the plot-reliant mold of most human dramas toward something more haunting and powerful. 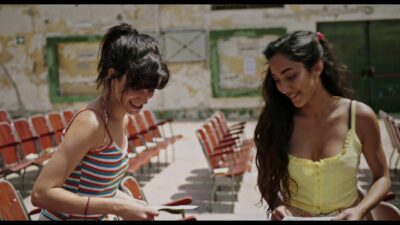 “Five orphaned sisters — Katia, Lia, Pinuccia, Maria, and Antonella — live alone in a lively apartment in Palermo, Sicily, where they sustain themselves by loaning out pigeons for ceremonies and events. On their day off, they head to the beach, passing through a field peppered with enormous dinosaur figurines and initiating a pop music-scored dance party upon their arrival. These magical moments are grounded by the cinematographer Gherardo Gossi’s tactile photography, which accentuates the youthful vitality of the sisters’ bodies and the playful chaos of their movements.

“Following the death of a sister, Dante skips ahead to a future in which the group — now played by a different group of actresses — are middle-aged and broken, each in their own particular way. They remain in the same apartment, while ghostly manifestations of their missing sister create a stark contrast between their aging bodies and those of their brimming younger selves. 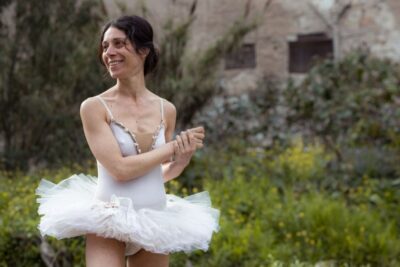 “A third act shows three sisters in old age and in mourning. Yet the apartment and its white cabinet — adorned with an etching of a beach — looks the same. By the end, Dante stages a transcendent confrontation with the impermanence of the body, destined to degrade, yet sustained by the memories and relationships that have come to define it.”