Laemmle Theatres and the Anniversary Classics Series present a special evening with Angela Lansbury to celebrate the 40th anniversary of DEATH ON THE NILE, which features one of her most captivating performances. The film is adapted from Agatha Christie’s 1937 novel, which boasted one of the author’s most diabolically clever mystery plots, along with sumptuous atmosphere and a compelling cast of characters. 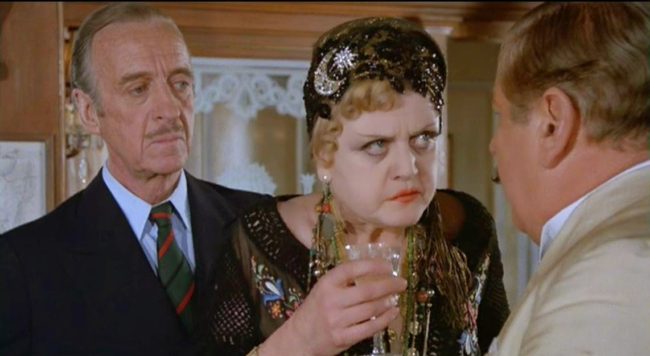 Producers John Brabourne and Richard Goodwin had scored a box office success in 1974 with a lush version of Dame Agatha’s ‘Murder on the Orient Express,’ featuring an all-star cast. In 1978 they decided to make a follow-up picture, with a new Hercule Poirot, played by two-time Oscar winner Peter Ustinov. Referring to its predecessor, Variety called DEATH ON THE NILE “a sequel that’s even better than the original” and praised the new picture as “a clever, witty, well-plotted, beautifully produced and splendidly acted screen version of Agatha Christie’s mystery.”

The producers recruited another dazzling cast, full of Oscar nominees and winners—in addition to Lansbury, the roster of suspects included Bette Davis, Maggie Smith, David Niven, Jack Warden, George Kennedy, along with younger actors Mia Farrow, Jon Finch, and Olivia Hussey. This time the filmmakers went all out on production values, filming on location in Egypt at many ancient historic sites. Award-winning cinematographer Jack Cardiff (‘Black Narcissus,’ ‘The Red Shoes,’ ‘The African Queen’) captured the locales in all their splendor. Anthony Powell won an Oscar for his elegant costumes, and Nino Rota (‘8 1/2,’ ‘The Godfather’) composed the score. John Guillermin directed.

Anthony Shaffer, the writer of ‘Sleuth,’ penned the screenplay, and as Pauline Kael wrote, “The script by Anthony Shaffer has wit and edge and structure…Shaffer has an ear for high-style romp, and the details are knobby and funny.” The mystery that Poirot has to solve concerns the murder of an arrogant, fabulously wealthy heiress (Lois Chiles) who finds herself with a boatload of enemies when she embarks on a honeymoon cruise down the Nile.

Lansbury has the juicy role of Salome Otterbourne, a flamboyant author of sexy romance novels. As Charles Champlin wrote in the Los Angeles Times, “Angela Lansbury very nearly commandeers the boat… Rolling her eyes and her vowels as if on the high seas, playing a vamp in some need of revamping, Lansbury is a model of pure and amusing camp.” Kael concurred: “Angela Lansbury does a superlative caricature of a wreck of a vamp… It’s a glorious piece of eccentric excess.” 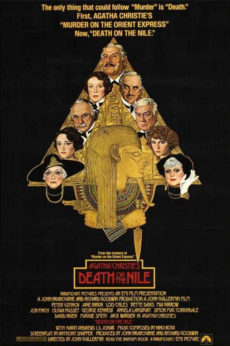 DEATH ON THE NILE marked Lansbury’s return to the screen after a seven-year absence, during which she conquered Broadway. Lansbury was nominated for an Oscar for her very first film, ‘Gaslight,’ in 1944. She earned a second nomination the following year for ‘The Picture of Dorian Gray.’

Her early screen appearances encompassed a dazzling range, from Frank Capra’s ‘State of the Union’ to the Judy Garland musical ‘The Harvey Girls,’ and Cecil B. DeMille’s ‘Samson and Delilah.’ Other films included ‘The Court Jester,’ ‘The Long Hot Summer,’ ‘The Dark at the Top of the Stairs,’ and ‘All Fall Down.’ But she made perhaps her most memorable screen appearance as the villainess in John Frankenheimer’s classic 1962 thriller, ‘The Manchurian Candidate,’ earning a third Oscar nomination.

Later in the 60s Lansbury turned to the musical theater and won her first Tony Award for originating the title role in Jerry Herman’s ‘Mame.’ She won four more Tonys over the next few decades. In the 80s she changed gears again, starring in the popular TV detective series, ‘Murder She Wrote.’ In 2013 she earned an honorary Oscar for her sterling body of work.

DEATH ON THE NILE with Angela Lansbury in person screens at 7:30pm on Friday, November 9th at the Ahrya Fine Arts Theater in Beverly Hills. Click here to purchase tickets.