Many of these films haven’t been shown on the big screen in decades, so now is the opportunity for horror fans to share the experience together and enjoy exclusive in-theater content, including videos produced by Attack Media, the folks behind “The Attack” web show on Twitch and behind-the-scenes footage.

THE HOUSE ON SORORITY ROW (1983) at 7:30pm and 9:55pm
After a seemingly innocent prank goes horribly wrong, a group of sorority sisters are stalked and murdered one by one in their sorority house while throwing a party to celebrate their graduation. 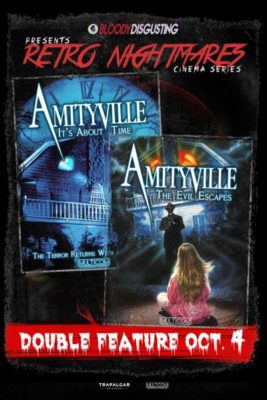 AMITYVILLE: THE EVIL ESCAPES (1989) at 7:30pm
The demonic forces that were lurking in the infamous house in Amityville for over 300 years escape to a remote California mansion by inhabiting a lamp. This evil latches onto a little girl living in the home by taking on the form of her dead father. Soon it manipulates her completely, overtaking her body to the point of possession. It’s up to a young priest to perform an exorcism and attempt to lift the curse from the desperate family.

AMITYVILLE: IT’S ABOUT TIME (1992) at 9:25pm
Widowed father Jake Sterling returns home from a business trip with an antique clock, intended as a gift to his two teenage children. Having been created by a 15th century French necromancer and belonging to the infamous haunted house in Amityville, sinister incidents begin to transpire around the neighborhood after Jake places the clock on his mantle. After a dog attack, fires, and forces that fracture the passing of time, Jake’s son and a neighbor race to uncover the history and mystery of the clock before it’s too late.

Fans will also be treated to exclusive in-theater bonus content from Attack Media, as Amityville: The Evil Escapes (1989) and Amityville: It’s About Time (1992) get the game show treatment in a five minute re-edit presented as a meme montage. 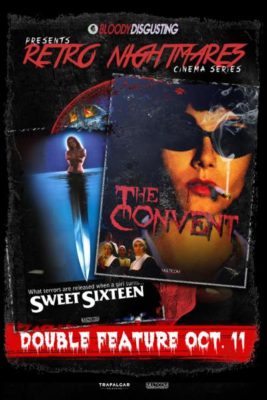 SWEET SIXTEEN (1983) at 7:30pm
Big city girl Melissa Morgan (Aleisa Shirley) tries to make new friends in the small Texas town she just moved to. The only problem is, each of the boys that she spends time with ends up brutally murdered. Her sixteenth birthday is on the way, but Melissa turns out to be a suspect when it seems she’s the last person who has seen her boyfriends alive.

THE CONVENT (2000) at 9:20pm
In 1960, a young woman commits a grisly massacre at St. Francis Boarding School, brutally murdering the clergy and nuns inside. Forty years later, college student Clarissa and her fickle friends break into the abandoned convent to tag it with their Greek letters before the Kappas beat them to it. Before long, the group discovers that it’s inhabited by demons that are intent on possessing them. As the group dwindles in numbers and the bodies pile up, those who remain uncover the convent’s long history with malevolent demonic forces and learn about the buried circumstances surrounding that fateful Sixties night.

In addition, fans will get exclusive new in-theater content featuring a behind the scenes and in-depth look at the filming and restoration of The Convent.