Laemmle Theatres and the Anniversary Classics Series present two Fred Astaire musicals in the popular Twofer Tuesday program this Easter holiday season, the 65th anniversary of THE BAND WAGON (1953) paired with, appropriately, the 70th anniversary of EASTER PARADE (1948). Astaire is considered the most influential actor-dancer in the history of motion pictures and television, and both films showcase his bountiful talent and artistry from the Golden Age of the movie musical. 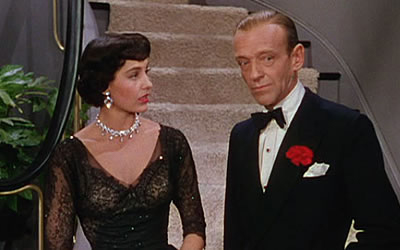 Astaire was coaxed out of retirement to replace an injured Gene Kelly as the lead in Easter Parade, co-starring Judy Garland, who plays a chorus girl he grooms for stardom to take the place of his former dancing partner (Ann Miller in her MGM debut). The period musical comedy, set in 1912, features the Irving Berlin songbook, including such joyful tunes as “Shaking the Blues Away,” “Stepping Out with My Baby,” “A Couple of Swells,” and the title song. 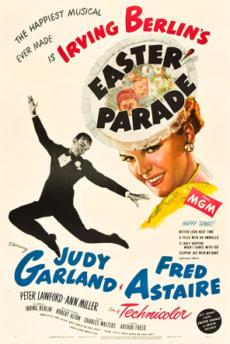 Directed by Charles Walters (Lili), written by Sidney Sheldon and the husband and wife team of Frances Goodrich and Albert Hackett (The Thin Man, Father of the Bride). Also starring Peter Lawford and Jules Munshin. Produced by Arthur Freed (Meet Me in St. Louis, An American in Paris, Singin’ in the Rain, Gigi). Oscar winner for Best Score of a Musical. Dance legend Gene Kelly later asserted, “the history of dance on film begins with Astaire.”

Astaire missed out on working with Cyd Charisse when she bowed out of Easter Parade, and was replaced by Ann Miller. But Astaire and Charisse got a second chance in 1953 with The Band Wagon, in which Astaire plays a “washed-up” movie star who pairs with a temperamental ballerina (Charisse) in creating a Broadway show. Producer Arthur Freed followed up his paean to the movies, Singin’ in the Rain, with that film’s writers Betty Comden and Adolph Green, who teamed this time with Broadway lyricist Alan Jay Lerner to concoct a sophisticated backstage musical confection. Nanette Fabray and Oscar Levant play characters based on Comden and Green, and are comically supported by Jack Buchanan as a maniacal director. 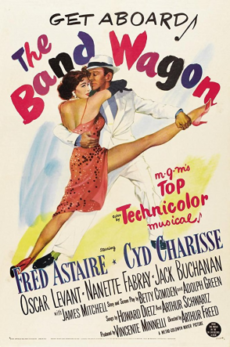 The memorable score showcases the songs of Arthur Schwartz and Howard Dietz, which include “By Myself,” “Shine on Your Shoes,” Dancing in the Dark,” and the show business anthem, “That’s Entertainment.” Deftly directed by Vincent Minnelli (An American in Paris, Gigi). Bosley Crowther, reviewing the film in The New York Times, praised all the assembled talent, “this witty and literate combination delivers a show that respectfully bids for recognition as one of the best musicals ever made.” Added to the National Film Registry in 1995. The Band Wagon, according to Leonard Maltin, “improves with each viewing.”

Here is a chance to see it back on the big screen in our Twofer Tuesday (two for the price of one) double bill with Easter Parade. Both films will play one day only, April 3, at Laemmle Theatres in NoHo, Pasadena, and West L.A.

For tickets to the 4:45pm EASTER PARADE and the 7pm THE BAND WAGON, click here.

For tickets to the 7pm THE BAND WAGON and 9:15pm EASTER PARADE, click here.


Error: Access Token for laemmletheatres is not valid or has expired. Feed will not update.