Based on the acclaimed story “Homecoming” by Gábor T. Szántó, 1945 is a haunting film about the deep undercurrents beneath the surface of a quaint village that’s ultimately forced to face up to its “ill-gotten gains” from the Second World War. We open 1945 next week at the Royal, Town Center, and Playhouse and next month at the Claremont 5. Former National Director of the Anti-Defamation League Abe Foxman saw and loved the movie and wrote the following about it:

“The Hungarian Jewish experience during WWII was unique among European countries. Until 1944, Hungarian Jews lived in relative safety despite anti-Jewish laws that existed since 1920 and pogroms in which the military participated (e.g. the 1942 Novi-Sad pogrom where 1000 Jews were murdered).

“But then, in March 1944, when the Germans occupied Hungary, Adolf Eichmann implemented the “final solution” in that country and was surprised by the collaboration and great help received from the Hungarian authorities. Thus, the deportation and murder of Hungarian Jews was swift and unparalleled among any other European country – in a few months more than 600,000 Jews were identified and sent to the murder camps. 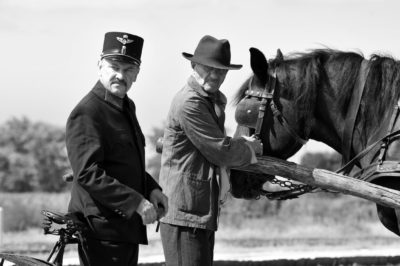 “Only now, more than 70 years after, “Yad Vashem” has succeeded to identify the names of 80% of those who perished but the issue of their property and belongings has hardly been addressed.

“For that reason, the new Hungarian film 1945 , currently playing in NYC theaters and soon opening across North America, is quite relevant to today. But not only because of that… 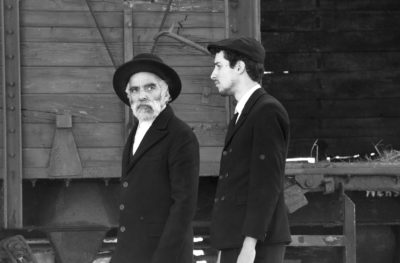 “On one clear day, after the war ended, two Orthodox Jews appear in a small village in Hungary, hiring two locals to carry two trunks labeled “perfumes” for them. All they do is walk slowly, across the village, after the wagon carrying their trunks, but their appearance evokes strong feelings of guilt and remorse that slowly make the village community deteriorate.

“It seems most of the villagers collaborated in extraditing the Jews that lived there up to a year before and gladly took over their property, from kitchenware to their houses. 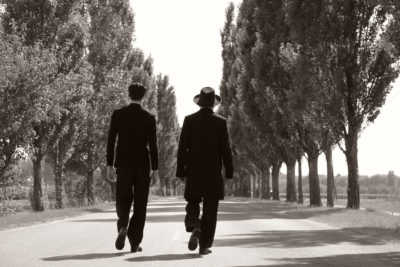 “Shot in beautiful black and white, director Ferenc Torok (who is not Jewish) interprets Gabor Szanto’s (who is Jewish) short story “Homecoming,” with vast strokes of sensitivity and a final mesmerizing emotional effect.

“1945 is a real masterpiece, heightened by the end of the film when we, the audience and the villagers, understand the real mission of these two Orthodox Jews. It’s a rare moment where one of Judaism’s most important contributions to the world, that of guilt and remorse over moral wrong doings and the sanctity of life, are presented in such a heart wrenching way on film. 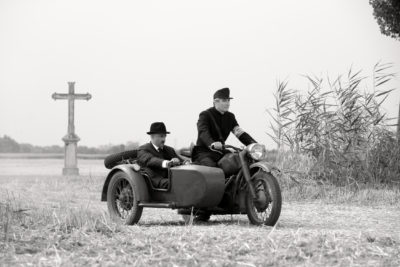 “What is most astonishing is that the two Jews have not traveled to this village to claim their stolen property, but the emotional effect of their silence provokes this issue out from the conscience of the villagers.

“The issue of the stolen property of the Jews is still relevant today. Just recently the Polish government issued a new law which states compensation funds will be awarded only to people that are Polish citizens in the present, thus withholding compensation to the Jews and their descendants whose property was absconded in Poland during these years. 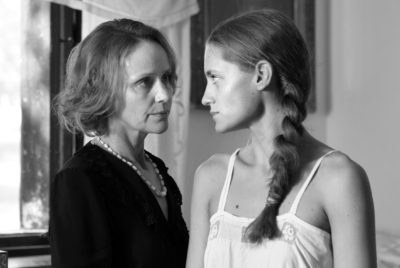 “Although Germany started compensating Jewish victims in the 1950’s, most Eastern European governments are still dragging their feet on this issue.

“The film 1945 is an astonishing new achievement which I highly recommend every human being to see, regardless of his/her religion.”