On Friday we’ll open the winning documentary HAROLD AND LILLIAN: A HOLLYWOOD LOVE STORY at the Monica Film Center, Playhouse 7, and Town Center 5. It is a fascinating account of the romantic and creative partnership of storyboard artist Harold Michelson and film researcher Lillian Michelson, two unsung heroes of Hollywood’s Golden Age. Although they worked on hundreds of classic films and were responsible for some of Hollywood’s most iconic examples of visual storytelling, their contributions remain largely uncredited. This film chronicles their remarkable marriage and careers through six decades of movie-making history. 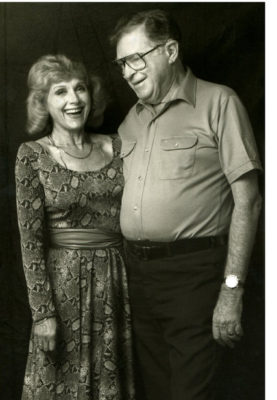 To get a sense of how special this film is, read the April 28, 2017 the New York Times ‘critic’s pick’ review by Monica Castillo: ‘Harold and Lillian’ Introduces a Hollywood Power Couple ­ and then come see the film. Several screenings will feature Q&A’s, including some with Mrs. Michelson.

“Harold and Lillian Michelson’s names may not sound familiar, but you’ve most likely seen their work in “West Side Story,” “Rosemary’s Baby” and “The Birds,” among many other films. Harold, the storyboard artist husband, and Lillian, the film researcher wife, were a prolific team whose careers are being profiled in Daniel Raim’s documentary “Harold and Lillian: A Hollywood Love Story.”

“Through charming animated sketches and interviews with the couple and some of their friends, like Mel Brooks, Francis Ford Coppola and Danny DeVito, the documentary reflects on the couple’s work together — often with Mrs. Michelson’s findings inspiring her husband’s art.
“Mr. Michelson, who died in 2007, climbed the industry ladder as a storyboard artist, eventually becoming an art director and production designer. Not wanting to stay at home, Mrs. Michelson volunteered at a studio library and became a sought-after film researcher.
“Their behind­-the-­scenes influence on filmmakers was far­-reaching. Mr. Michelson’s storyboards show sketched versions of memorable scenes, like the parting of the Red Sea in “The Ten Commandments” and Anne Bancroft’s raised leg overshadowing Dustin Hoffman in “The Graduate.” Mrs. Michelson excitedly recalls interviewing women at Canter’s Deli in Los Angeles about traditional costumes for “Fiddler on the Roof” and questioning a drug kingpin for “Scarface.”
“The stories are told out of order to make room for personal tangents, including the challenges of raising an autistic son in the 1960s. Like flipping through misplaced leaves in a photo book, the documentary maintains a free­flowing tone as it uncovers the work that went into creating some of the indelible scenes in Hollywood history.”