UPDATE: Winners have been drawn and emailed. Details below!

It’s “Horror in the Hall” this Halloween as the silent classic, DR. JEKYLL AND MR. HYDE, is accompanied live by Clark Wilson on the Walt Disney Concert Hall’s monster organ. 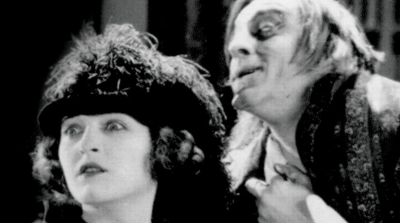 Paramount’s Dr. Jekyll and Mr. Hyde, directed by John S. Robertson and produced by Famous Players-Lasky, was the first of three film treatments of Robert Louis Stevenson’s famous novella produced in 1920. It starred John Barrymore as the fatally split personalities, and featured Martha Mansfield and Nita Naldi as their love interests, roles based on a stage treatment, not the original story.

Four winners (selected at random) will each receive a pair of tickets to DR. JEKYLL AND MR. HYDE. As a bonus, winners will also receive two tickets to Laemmle’s very own pre-Halloween double feature of THE BRIDE OF FRANKENSTEIN (1935) & ABBOTT AND COSTELLO MEET FRANKENSTEIN (1948) on Friday, 10/30 at the Ahrya Fine Arts in Beverly Hills. Good luck!

Special thanks to the LA Phil for making these tickets available to our customers! If you don’t win, please consider purchasing tickets here.