If you haven’t experienced the Indian blockbuster RRR in a theater, good news, we are bringing it back! The movie is an exhilarating, action-packed spectacular mythologizing two real-life freedom fighters who helped lead India’s fight for independence from the British Raj, Komaram Bheem (N.T Rama Rao Jr., aka Jr NTR) and Alluri Sitarama Raju (Ram Charan). Set in the 1920s, before their fight for India’s independence began, RRR imagines a fictional meeting between the two, set into motion when a young Gond girl is stolen from her village by British soldiers. With a powerful message, staggeringly choreographed action sequences, and an all-timer of a musical number, RRR is sheer big-screen joy from start to finish, and it is something best experienced with an audience to fully appreciate big and loud, as intended.

Catch RRR starting August 26 at the Monica Film Center and Town Center and a week or two after that at the Claremont and Newhall. All are venues where we have not previously screened the film. 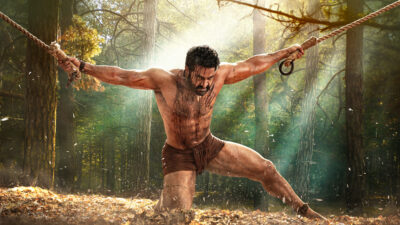 The New York Times recently published a story about the RRR phenomenon headlined “How the Indian Action Spectacular RRR Became a Smash in America.” Among the U.S. exhibitors quoted about helping making the film a cross-over hit is Laemmle Theatres president Greg Laemmle:
“Gregory Laemmle, the president of the West Coast theater chain that bears his name, attended the Seattle screening after booking RRR at three of the Laemmle Theaters’ California locations. (RRR has since gone on to play at five Laemmle theaters.) Laemmle was already a believer, sight unseen, thanks partly to Marchetti’s recommendation and partly to enthusiastic social media responses from the initial release. Ticket sales at Laemmle theaters were high enough to warrant a weeklong engagement, which began June 3. “But after seeing the movie, I knew that I would need to clear space for that run to play” longer, Laemmle said.

“Cristina Cacioppo programmed RRR at the Nitehawk Prospect Park in Brooklyn, where it drew enthusiastic moviegoers in the 20-to-30 age range, most from outside the Indian diaspora. “There was an overall wave of joy throughout,” Cacioppo said by email, adding later. “You could feel the room smiling, the jaws dropping.”

“Jake Isgar at the Alamo Drafthouse chain said there were at least 10 rounds of spontaneous applause from a packed screening in San Francisco. “This movie is great on whatever-sized screen you watch, but it’s next-level in a full theater with a rabid audience,” he added.” 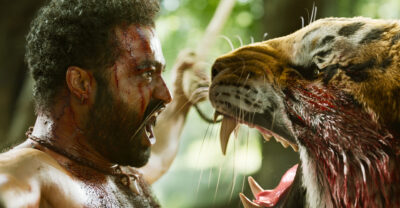 L.A. Times lead film critic Justin Chang included RRR on his list of 10 best films for the first half of 2022:

“The longest feature on my list runs more than three hours and earns every supercharged minute. Already the second-highest-grossing Indian film of all time in America (it’s grossed more than $140 million worldwide), S.S. Rajamouli’s Telugu-language sensation is a hellaciously entertaining mash-up of history and legend, politics and romance, hyperviolent action and song-and-dance musical, venomous snakes and throat-mauling tigers. As the two mighty warriors whose tender bromance becomes a truly infernal affair, N.T. Rama Rao Jr. and Ram Charan are forces of nature.”

(Side note: even though Justin included the film in his Top 10, the film still hasn’t actually had a full review in the Times. Yet another example of good films not getting reviewed by the tragically thin Times film section.) 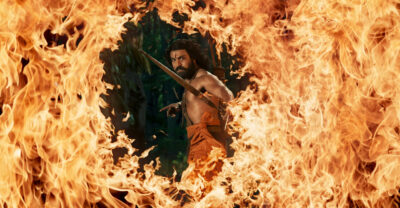 “A movie with the action sensibilities of James Cameron and the ambitious scope of George Miller has to be considered a definitive Oscar contender, right? Not without the proper backing by a studio or, in this case, a country that will submit your film for the Academy’s best international feature award. 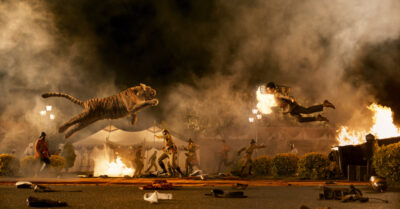 “When the 94th Oscar nominations were announced back in January 2022, India’s official submission “Pebbles” was not among the films recognized for international feature. It marked exactly 20 years since India’s last nom in the category.

“In fact, only three Indian films in total —Mother India (1957), Salaam Bombay! (1988) and Lagaan (2001) — have been nominated for the award. The last of which lost to No Man’s Land from Bosnia and Herzegovina.

“The skyrocketing success of RRR has been the undercover Cinderella story of the year. A global smash with huge box office receipts, the film found a pathway to the American cultural zeitgeist with consumers discovering it on Netflix. It was distributed theatrically by Variance Films in the U.S., and a current trend by the Academy to embrace non-English language features in the last few years offers an alternative pathway to awards recognition if India decides to look elsewhere. But why would they?”

Read the rest of the piece here.