I’m thrilled and honored to be bringing my newest film, 18½ back to my filmmaking home in LA, Laemmle Theaters! 18½ is about a White House transcriber who tries to leak Nixon’s 18½-minute gap to the press, but runs afoul of hippies, swingers and nefarious forces. It stars Willa Fitzgerald (Reacher), John Magaro (Kelly Reichardt’s First Cow and Cannes competition Showing Up), Vondie Curtis Hall (Harriet), Richard Kind, Catherine Curtin and the voices of Ted Raimi as Gen. Al Haig, Jon Cryer as HR Haldeman and Bruce Campbell as Richard Nixon.

The film is having its L.A. Premiere at the Laemmle Monica, on May 27th and screening for a week there, with bonus screenings at the Glendale on May 31 and NoHo7 on June 1, with guest Q&As for most of the screenings.  After winning audience and jury awards and screening at some 21 film festivals on four continents over the last few months, it’s very exciting to finally bring the film to the greater Los Angeles community.

My history with Laemmle theaters goes back to 1995 when my first film, Omaha (the movie) screened for 11 straight weeks. Whether I was showing up at the old Sunset 5 wearing a sandwich board, or throwing raw steaks at the audience, I was buoyed in my efforts by Bob and Greg Laemmle, who not only tolerated but encouraged my indie film shenanigans. The Laemmle family support of independent film in the heart of Los Angeles has proved time and time again that Hollywood is more than just big budget studio superhero films and streaming “content.” Laemmle Theaters are truly one of the last bastions of support for independent filmmaking in the belly of the beast. We are all indebted to their decades-long support of all our films, and our ability to share them with audiences and engage in a uniquely live cinematic conversation.

As a filmmaker who lives a block south of the biggest studios in the world (so, technically they’re in my shadow), 18½ was largely produced during the pandemic with the incredible support and help of my Culver City neighbors, family and friends – for whom I baked sourdough bread as barter for music cues, VFX shots, cameras, posters and sound mixing. I’m looking forward to seeing many of them at our screenings, and I know you’ll love meeting such amazing collaborators as composer Luis Guerra, featured vocalist Caro Pierotto, and so many other talented artists who will be joining me for our Q&As.  If it takes a village to make a film, it takes a village idiot like me to make one in the middle of a pandemic! 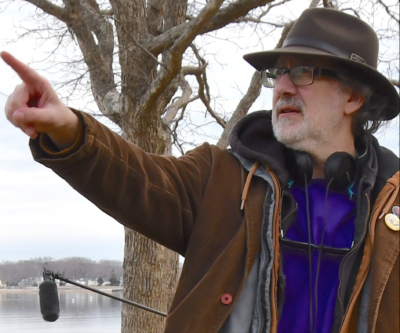 But don’t take my word on why you should see the film. I’m thrilled and humbled by all the fantastic reviews we’ve been getting…

“18½ is a rare find in the current landscape of filmmaking, an original story that draws you in from the opening frame…18½ is weird, engrossing, and thoroughly enjoyable.” – Susan Leighton, ScreenAnarchy

“18½ is a mind-bending, hammed-up, highly paced, farcical, funny, and suspenseful dark fairy tale. This makes it a timeless curveball aimed to hit the strike zone of our minds.” – Lloyd Sederer, M.D., Psychology Today

“Mirvish’s film is a fun and eccentric outing, relishing in the “what ifs” of alternate political history; a much-needed breath of fresh air when taking on politics in today’s charged climate.” – Sammy Levine, Hammer to Nail

“18½ is so riveting and immersive that I forgot I was making a cup of tea and found a cup of cold, over-steeped leaf water after the final credits rolled.” – Jamie Toth, The Somewhat Cyclops

Looking forward to seeing you at Laemmles and talking about 18½!