On Wednesday, December 15, at 7 PM at the Royal Theatre, Laemmle Theatres and the Anniversary Classics Series present a (slightly belated) 50th anniversary screening of the melodrama that launched the all-star disaster movie craze, Ross Hunter’s production of Airport. Set during a fierce winter snowstorm at and around a Chicago airport, and with the added complication of a mad suicide bomber aboard a jet headed for Rome, the film was full of spectacle and a heady mix of tempestuous subplots. It earned 10 Oscar nominations, including Best Picture and Best Screenplay, and won the award for Best Supporting Actress Helen Hayes as a feisty stowaway aboard the plane headed for disaster.

David Newman, son of Airport composer Alfred Newman, will be in attendance. 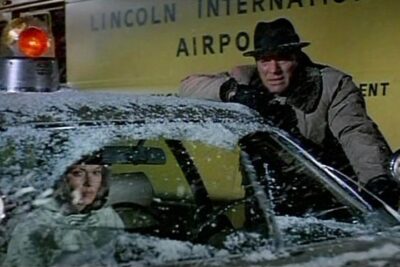 Multiple past and future Oscar winners were also in the cast, including Burt Lancaster, George Kennedy, Van Heflin, and Maureen Stapleton, along with “king of cool” Dean Martin, Jacqueline Bisset, Jean Seberg, Barbara Hale, Dana Wynter, Lloyd Nolan, and Barry Nelson. The film was written and directed by Oscar-winning filmmaker George Seaton (Miracle on 34th Street, The Country Girl, The Counterfeit Traitor). It was adapted from the best-selling novel by Arthur Hailey and also earned nominations for Best Cinematography, Art Direction, Film Editing, and Sound. It also marked the final Oscar nomination for composer Alfred Newman, who died shortly before the film opened. It was Newman’s 45th nomination in a remarkable career that included nine previous Oscar wins (for such diverse films as The King and I, Love is a Many Splendored Thing, and The Song of Bernadette).

Although in essence an old-fashioned melodrama, the film broke new ground in several areas. The idea of a suicide bomber, a desperate and disgruntled construction worker, was a novel plot point in 1970. Although the movie was G rated, it dealt with extramarital romances in a nonjudgmental way that would have been unthinkable just a few years earlier. And its formula of an all-star cast of characters in jeopardy set the model for other disaster movies of the 70s, including The Poseidon Adventure, The Towering Inferno, and Earthquake, not to mention three sequels and the hugely successful parody Airplane!

The movie grossed a phenomenal $100 million (equivalent to more than $650 million today), making it the highest grossing picture in Universal’s history up to that time. When it had its TV network premiere three years later, it also broke records. Although reviews at the time were mixed, Variety declared good-naturedly, “Based on the novel by Arthur Hailey… with a cast of stars as long as a jet runway, and adapted by George Seaton in a glossy, slick style, Airport is a handsome, often dramatically involving” film. Or as Leonard Maltin put it, “Grand Hotel plot formula reaches latter-day zenith in ultra-slick, old-fashioned movie that entertains in spite of itself.”

Special guests and other surprises will enhance this fun-filled holiday screening.