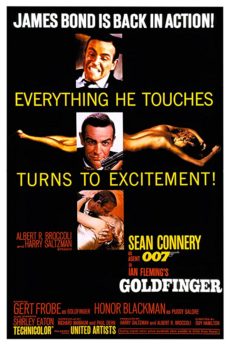 As a special moviegoing treat for the holiday season, Laemmle Theatres and the Anniversary Classics Series present the movie that is generally regarded as the best in the spectacularly successful 007 franchise, GOLDFINGER (1964).

When it opened in December 1964, the third James Bond film scored an instant success that insured the durability of the series. It is now the longest-running franchise in cinema history, with a new entry coming in the spring of 2020, almost 60 years after Bond made his first screen appearance. Even with a lot of spectacular followup films, GOLDFINGER remains—shall we say—the gold standard.

Roger Ebert called it his favorite Bond film, and in 2006 Entertainment Weekly also named it as the best of the Bonds. It remains the highest rated Bond movie on Rotten Tomatoes, with a score of 97 per cent positive.

This film includes all the elements that Bond fans adore—thrilling action sequences, drily witty dialogue, nefarious and memorable villains, a bevy of Bond girls headed by Honor Blackman’s Pussy Galore, and a title song that may be the best loved of all Bond theme songs, written by John Barry, Anthony Newley, and Leslie Bricusse and sizzlingly performed by the inimitable Shirley Bassey. 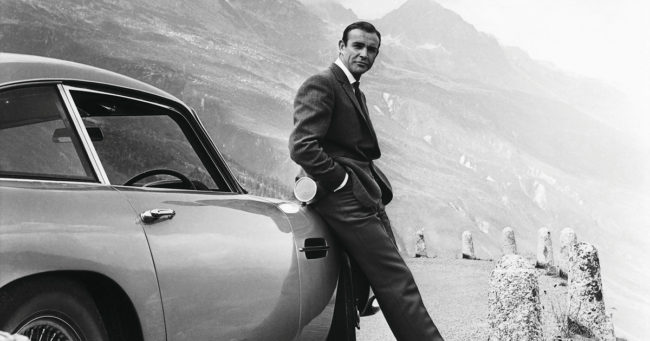 Sean Connery exudes charisma, and the cast includes Gert Frobe as the greedy Goldfinger, Harold Sakata as his sadistic henchman Oddjob, Shirley Eaton as one of Bond’s paramours who meets a dire fate, and series regulars Bernard Lee as M, Desmond Llewelyn as Q, and Lois Maxwell as Moneypenny. Guy Hamilton (who went on to direct three more Bond films) directed the screenplay by Richard Maibaum and Paul Dehn, from the Ian Fleming novel.

The story centers around Goldfinger’s plot to rob Fort Knox, and since U.S. authorities would not allow anyone inside the national mint, even for research purposes, the brilliant production designer Ken Adam (who designed several of the Bond pictures and won two Oscars, including one for Stanley Kubrick’s Barry Lyndon) used pure imagination to build the set at Pinewood Studios outside London.

The film was also the first Bond movie to introduce a series of elaborate gadgets, including an Aston Martin DB5, that helped Bond to foil his adversaries. Stunt coordinator Bob Simmons played a crucial role in orchestrating the spectacular fight scenes, and the movie was the first Bond film to win an Oscar—for sound effects editing. 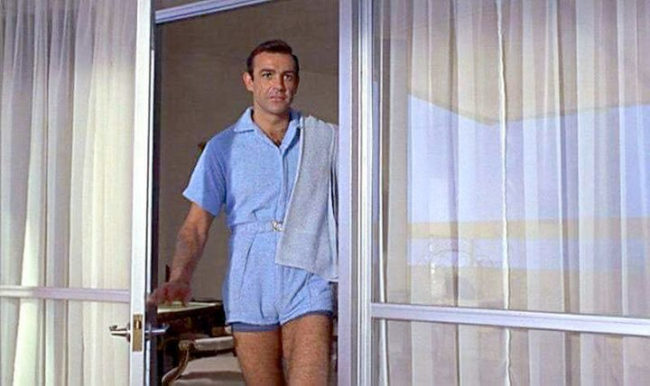 The film’s budget was $3 million, which was the cost of the first two Bond movies (Dr. No and From Russia With Love) combined, and it made back its cost after just two weeks in release. Interest was so high in December 1964 that the DeMille Cinema in New York stayed open for 24 hours straight to accommodate the crowds.

Reviews were also enthusiastic. In London Derek Prouse of the Sunday Times called it “superbly engineered…most entertainingly preposterous,” and the Guardian hailed “the most exciting, the most extravagant of the Bond films.”

In the United States, Boxoffice Magazine praised the film as “so cleverly directed at breakneck speed by Guy Hamilton that patrons scarcely have time to catch their breath.”

For this special screening, enjoy a Bond trivia contest and other fun extras. And you might want to have a martini before the show. “Shaken, not stirred,” of course.

Our 55th anniversary screening of GOLDFINGER begins at 7pm on Monday, December 30th at the Laemmle Royal in West L.A. Click here for tickets.