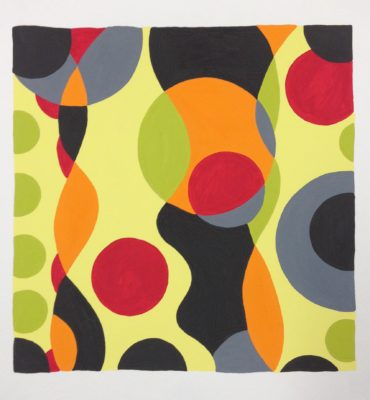 ART IN THE ARTHOUSE  proudly presents COLOR, LANGUAGE, TEXTURE & TONE featuring works by Joyce Elias and Bea Husman in Glendale. The art is for sale and on display till October 2019. Sales benefit the Laemmle Foundation and its support of humanitarian and environmental causes in Los Angeles. Stop by our gallery –  no need to buy a movie ticket to view.

About the exhibit
JOYCE ELIAS: Living near Lake Michigan in an area known for sultry skies and dreary days, one might expect Joyce Elias to express her work in various shades of gray. Most mornings, Elias travels to the edge of that lake and photographs the waters and moody heavens that surround it.“The connection between art and nature intrigues me,” says Elias. In this series, “limiting the size and shapes in the works allows me more freedom to experiment with the unusual color combinations found in the natural world”. 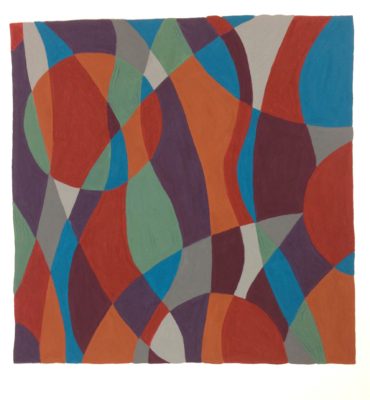 Color bounds out of her evenly painted tempera works – flat, rounded forms gyrate as they intersect the plane. Influenced by Josef Albers and Sonia Delaunay, artists who deeply explored color from 1900 to the late 1970s, Elias’ nuanced shades dance between semi-circle shapes. Color is a funny thing; it grabs us in the darkest of times. The artist’s choice of language is born out of tone and vibration. A graduate of the San Francisco Art Institute, Elias later earned a teaching degree at the School of Art Institute in Chicago

BEA HUSMAN: Fellow Chicagoan, Bea Husman uses a language that stems from texture, tone and archaeology. An iconoclast inspired by her world travels, she created cultured works where color acts as a ploy and texture creates dimension, even within a silkscreen print. Husman remained productive until her last days at 96 years of age.

Please have Sheryl Myerson contact me at fiddlethis@yahoo.com. I don’t have the correct spelling for her email address. This concerns the sale of my artwork today at the opening of your Pasadena Art Show at the Laemmle Playhouse. Thanks! Richard Greene