Laemmle Theatres and the Anniversary Classics Series present a tribute to America’s most spirited sweetheart, Doris Day, who died on May 13 at the age of 97. We have screened some of Day’s best-loved movie— The Man Who Knew Too Much, Pillow Talk, and Lover Come Back — in our Anniversary series over the last few years. Join us as we remember her with a double feature of two of her very best musical films—the Western romp Calamity Jane and the dramatic story of 1920s torch singer Ruth Etting, Love Me Or Leave Me. Both films demonstrate that Day was a pioneer in portraying strong-willed female characters during the conformist 1950s. Enjoy both of these entertaining movies for one low price!

After a stellar career as a big-band singer, Day started in movies in 1948 and she made a number of lighthearted musical programmers before starring in ‘Calamity Jane’ in 1953. This sagebrush musical comedy marked a change of pace for her and catapulted her to full-fledged movie stardom. She later cited it as her personal favorite of all the films she made. 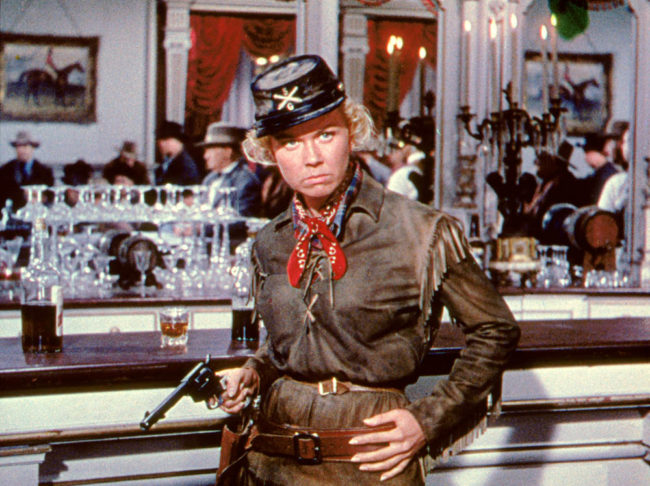 Warners admitted they made the film to cash in on the enormous success of ‘Annie Get Your Gun,’ another musical tale of Western gunslingers. In Calamity Jane, Day plays the real-life Deadwood sharpshooter, paired with Howard Keel as Wild Bill Hickok. During most of the film, they are sparring partners and friendly antagonists, and it is not until the climax that Jane recognizes her true feelings for Bill. That transformation comes when Day croons “Secret Love,” the song by Sammy Fain and Paul Francis Webster that won the Oscar as best song of the year and also became a #1 hit on the pop charts. The film also earned Academy Award nominations for best scoring of a musical and for best sound.

Kate Muir of the British Times wrote of Calamity Jane, “As a pistol-packin’ cowgirl in fringed leather trousers, Day is terrific.” Leonard Maltin concurred: “Doris is irresistible as the bombastic, rootin’-tootin’ title character in this lively musical.”

Love Me Or Leave Me, made two years later, was nominated for six Oscars, including one for the screenplay by Daniel Fuchs and Isobel Lennart. It won the Oscar for the original story by Fuchs. Other nominations included one for a new song, “I’ll Never Stop Loving You,” which became another of Day’s most popular romantic ballads. James Cagney also earned a nomination for best actor for his electrifying portrayal of Etting’s husband and manager, gangster Marty Singer. Although he helped to advance Etting’s career, he was often brutally domineering in their personal relationship, and this hard-edged portrayal of an abusive marriage was ahead of its time in the 1950s and gave Day a vivid opportunity to essay a dramatic role. She brought it off with skill, while at the same time performing several of Etting’s signature songs, including “Ten Cents a Dance” and “Shaking the Blues Away.” Cameron Mitchell and Tom Tully co-star in the film, which was directed by Charles Vidor.

Variety called the film “a rich canvas of the Roaring 20s with gutsy and excellent performances.” Pauline Kael added, “The script by Daniel Fuchs and Isobel Lennart is several notches above the usual, and James Cagney brings frightening strength to his role as the singer’s vicious lover.” It was reportedly Cagney who suggested casting Day as Etting, and she rewarded her co-star’s instinct with one of the strongest performances of her career.