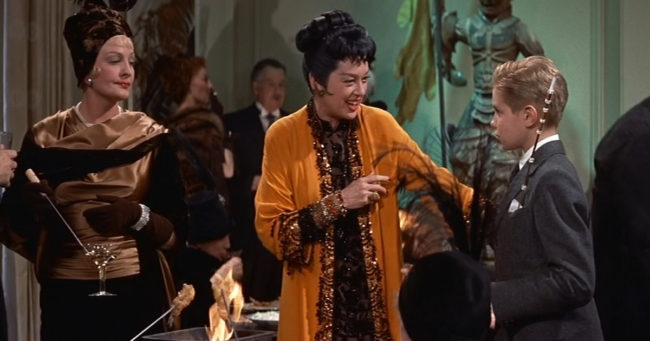 Laemmle Theatres and the Anniversary Classics Series present the 60th anniversary of AUNTIE MAME (1958), the hilarious film version of the best-selling novel by Patrick Dennis (Edward Everett Tanner III) based on his madcap, eccentric aunt, and starring Rosalind Russell in her signature role.

The book became a hit Broadway play in 1956, adapted by Jerome Lawrence and Robert E. Lee. For the film version, acclaimed screenwriters Betty Comden and Adolph Green (Singin’ in the Rain, The Bandwagon) fashioned a witty script from the same source material. The film was a box office bonanza, the second highest grossing movie released that year.

The story focuses on Mame Dennis, a wealthy Manhattan sybarite with a social conscience, who takes charge of her orphaned ten-year-old nephew Patrick in 1928. Their adventures through the next two decades exposes Patrick to bohemian characters and lifestyles that clash with the upper class conventions, prejudices and pretensions of the era. 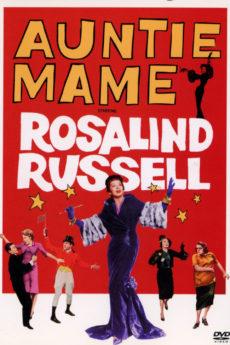 Mame’s financial wipeout in the Wall Street Crash of 1929 only adds to the merriment as she resourcefully pursues her life’s philosophy, “Life is a banquet, and most poor suckers are starving to death!” Directed by Morton Da Costa (The Music Man), who brought the same touches he used for the stage version (blackouts, fadeouts) to the film for a tone of heightened theatricality.

Rosalind Russell, the celebrated comedienne and dramatic actress (The Women, His Girl Friday, My Sister Eileen, Picnic, Gypsy), had the role of a lifetime with Auntie Mame, and she made the most of it, resulting in her greatest career triumph. She is ably supported by a game and skilled cast, including Broadway holdovers (Peggy Cass, Jan Handzlik, Yuki Shimoda) and Hollywood players (Roger Smith, Coral Browne, Fred Clark, Joanna Barnes, Pippa Scott, Patric Knowles, Lee Patrick).

Critical consensus felt that the character could have easily been overbearing in the wrong hands, but Russell and company overcame any reservations. Bosley Crowther of The New York Times offered high praise for Russell, “Lets herself go with even more gushiness and grandeur of gesture than she did on the stage,” he said, also noting the warmth and heart she brought to the part. Variety cheered the “handsome and slick production… hilarious and human in equal measure.”

Crowther’s opening line of his highly favorable review in 1958 indicates the appeal of the film, which has never dated. As he stated, “Hurricanes may be out of season, but one blew into the (Radio City) Music Hall yesterday…this full movie version of the stage play with Rosalind Russell again at the center of it, does sure enough generate gales of laughter as it sweeps across the screen.”

Come see AUNTIE MAME once again on the big screen, showing at the Ahrya Fine Arts theatre on Saturday, August 4 at 7:30pm. Before the screening there will be a Q&A with co-star Pippa Scott (The Searchers, Petulia), one of the last remaining survivors of the cast. Click here for tickets.