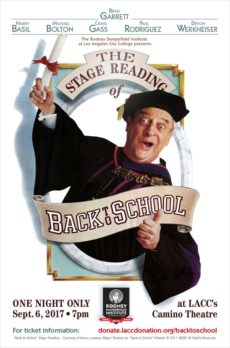 We are pleased to direct your attention to Los Angeles City College, which will host a one night star-studded live reading of the comedy classic Back to School September 6 as part of the launch of their new Rodney Dangerfield Institute! There will also be a Q&A with the actors from the original film followed by a VIP meet-and-greet. More information is here.

It’s a good cause and one we are especially happy to support because Laemmle Theatres éminence grise Bob Laemmle attended LACC for a year, an experience that was formative in getting him re-focussed after his first attempt at college was not fruitful.  So we want to promote the important role played by community colleges in general, and LACC in particular.  Also because we love Back to School. “Why don’t you call me sometime when you have no class.”