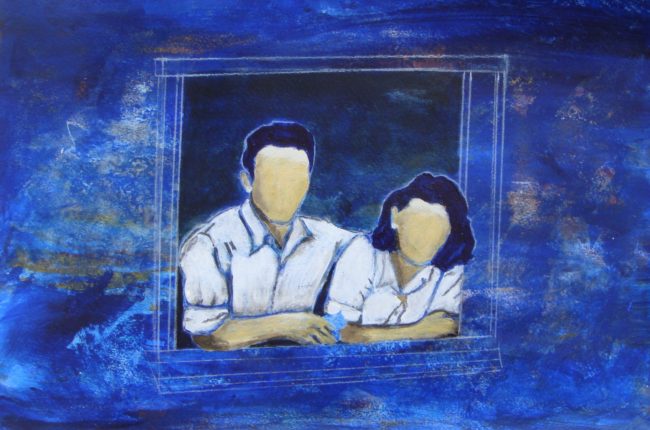 Art in the Arthouse proudly presents LOVE, HOPE, MEMORY, featuring the works of SHULA SINGER ARBEL at the Monica Film Center. Please join us for our slide show on the big screen, artist talk, and of course, the wine, cheese and conversation Art in the Arthouse is known for. Drawing inspiration from her incredible family history,  ARBEL created paintings based on photographs found in an old photo album. Curated by Tish Laemmle, the exhibit runs through early January 2018 at the Monica Film Center in Santa Monica.  shulasingerarbel.com 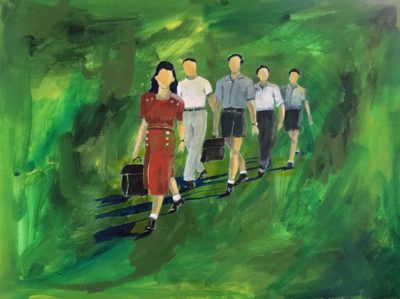 LOVE, HOPE, MEMORY is the story of Shula Singer Arbel’s parents, Edith and Michael Singer. They met in 1946 in a Displaced Persons Camp in Heidenheim Germany, right after World War II. ARBEL’S mother was a survivor of Auschwitz, her father had been in the Russian and Polish Army. In spite of the tremendous loss and unimaginable suffering, this was a time of great hope and optimism for the future. It was a time of building new lives and looking forward. Based on black and white photographs found in an old photo album, the portraits are a fusion of representational, abstract, and dream-like images; a flattening of form mixed with painterly surfaces. The figures in the paintings are intentionally faceless to create a more universal narrative.

ARBEL was born in Israel and moved to Los Angeles at the age of three. She received an MFA degree from UCLA in Film Production, worked in the film industry and was the first recipient of the Barbra Streisand screenwriting award.

Now a full-time artist, she exhibits her work extensively in galleries throughout Los Angeles and in public venues including, Pershing Square Park, the Wilshire Vermont Metro Station, and a billboard in Culver City.

What drew me to ARBEL’s artwork were not only her magnificent bright colors and patterns, but also her ability to evoke the past. Mesmerized by the figures in her “memory” series, I imagine myself as one of those women, knowing my childhood is gone forever, but my future can be as brilliant as my imagination will allow.