Set in 1940s New York, Stephen Frears’ Florence Foster Jenkins is the true story of the legendary New York heiress and socialite (Meryl Streep) who obsessively pursued her dream of becoming a great singer. The voice she heard in her head was beautiful, but to everyone else it was hilariously awful. Her “husband” and manager, St. Clair Bayfield (Hugh Grant), an aristocratic English actor, was determined to protect his beloved Florence from the truth. But when Florence decided to give a public concert at Carnegie Hall, St. Clair knew he faced his greatest challenge.

All of our 7:10 PM screenings on Thursday, August 11 and 1:30 PM screenings on Sunday, August 14 at the NoHo 7, Playhouse 7, Town Center 5 and Claremont 5 will feature a special taped introduction from co-star Simon Helberg and after the screening a pre-taped Q&A with Mr. Helberg and stars Meryl Streep and Hugh Grant plus behind-the-scenes footage. Paramount Pictures will provide programs to audience members (while supplies last). 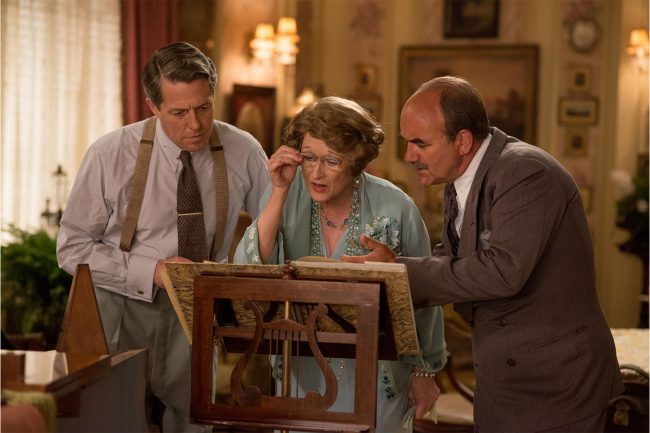 Directed by the great Mr. Frears (My Beautiful Laundrette, Dangerous Liaisons, The Queen), it’s no surprise the film has been getting great reviews. Writing in Slate, Dana Stevens said “Streep … makes the character’s delusional faith in her own talent so infectious that we ache at the thought of Florence’s impending humiliation even as we prepare ourselves to laugh at it.” In the New York Daily News, Stephen Whitty wrote “It’s a pleasure seeing Grant in a great part again, playing the sort of almost-cad he’s best at. And Streep – who, in real life, can belt anything from Broadway to Bruce – is clearly having a ball singing badly.” Jason Solomons of The Wrap said “There’s a deceptively masterful simplicity to Frears’ direction. In this age of blockbusters and superhero face-off mayhem, it reminds us that unfussiness is a virtue.”