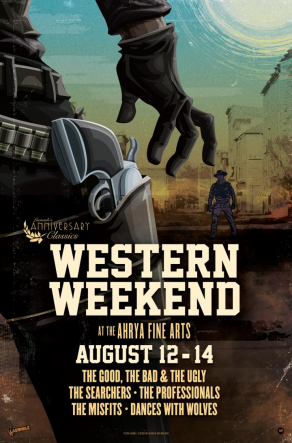 The films include John Ford’s masterpiece THE SEARCHERS, popular Oscar winner DANCES WITH WOLVES, spaghetti western supreme THE GOOD, THE BAD AND THE UGLY, and rediscoveries of the irreverent THE PROFESSIONALS and the elegiac THE MISFITS.

So saddle-up for a three day celebration August 12-14; the stagecoach stops at the Ahrya Fine Arts in Beverly Hills. Each program will be introduced by Sheriff Stephen Farber, President of the Los Angeles Film Critics Association.

Tickets for individual shows are available NOW on Laemmle.com and at the Ahrya Fine Arts box office:

THE GOOD, THE BAD AND THE UGLY – 50th Anniversary 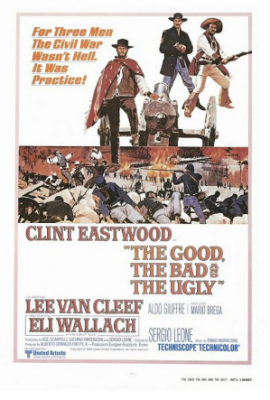 We open our sagebrush weekend with the “third and best of Sergio Leone’s ‘Dollars’ trilogy… the quintessential spaghetti Western,” according to Leonard Maltin. The trilogy became the most popular of the hundreds of European Westerns made in the 1960s and 70s. The Good, the Bad and the Ugly, set during the Civil War in New Mexico, is actually a prequel to A Fistful of Dollars and For a Few Dollars More, all of which starred Clint Eastwood as Blondie, or the Man with No Name. Leone and his screenwriters considered the film a satire with its emphasis on violence and deconstruction of Old West romanticism.

Made in 1966 and released in the U.S. at the end of 1967, the movie was propelled to big box office when composer Ennio Morricone’s main theme became a hit instrumental recording for Hugo Montenegro in 1968. The film had mixed critical reaction in its day but has been reevaluated and embraced through the decades, and is now considered one of the great Westerns. Also starring Lee Van Cleef and Eli Wallach, with cinematography by Tonino Delli Colli. 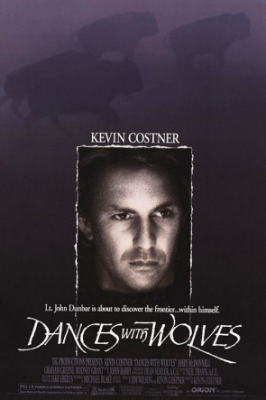 This film won seven Oscars in 1991, including Best Picture and Best Director Kevin Costner. (It was the first Western to be named Best Picture since Cimarron took the prize in 1931.) It remains one of the most popular Western films of all time, with one of the few positive and honest portrayals of Native American culture. And it is a genuine historical epic that deserves to be seen on the big screen, where its spectacular battle scenes and buffalo hunt can be fully appreciated.

Time magazine’s Richard Schickel praised the film by saying, “As a director, Costner is alive to the sweep of the country and the expansive spirit of the western-movie tradition.”

Special guest speakers at this showing will include actress Mary McDonnell, who was Oscar-nominated for her performance in the film and earned a second nomination for John Sayles’ Passion Fish two years later. Screens Saturday, August 13, at 2:15 PM. 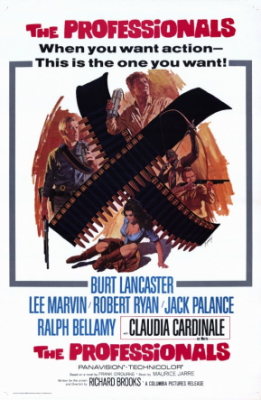 The film was nominated for three Academy Awards in 1966, including Best Director and Best Screenplay for Hollywood veteran (and past Oscar winner) Richard Brooks. This irreverent Western boasts plenty of sardonic humor and turns many of the values of the genre upside down, but it does not skimp on production values or striking cinematography (by Oscar winner Conrad Hall). “Taut excitement throughout” was the verdict of Leonard Maltin.

The four “professionals” of the title are played by Burt Lancaster, Lee Marvin, Robert Ryan, and Woody Strode, with an outstanding supporting cast headed by Jack Palance, Claudia Cardinale, and Ralph Bellamy. And be sure to stay to savor the movie’s last line, drolly delivered by Lee Marvin, one of the great kickers in Western film history. Screens Saturday, August 13, at 7:15 PM. 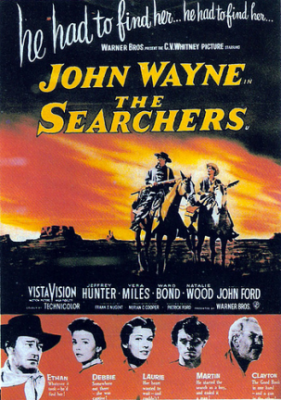 One of the finest collaborations of John Wayne and director John Ford is also one of the most influential and admired Westerns in history. At the time of its release, The New York Times’ Bosley Crowther called it “a ripsnorting Western,” but its reputation grew in later years.

In 2008 the American Film Institute named it the greatest of all Westerns. Its story of obsession and revenge influenced many later directors, including Martin Scorsese and Paul Schrader, and one of the most haunting scenes in the film was imitated in George Lucas’s Star Wars. Wayne plays Ethan Edwards, a bitter Civil War veteran who is determined to track down the Comanches who murdered his brother’s family and abducted his two nieces.

The Monument Valley locations where the movie was filmed are now iconic, and Wayne’s portrayal of the relentless, bigoted Edwards is one of his richest performances. The supporting cast includes Jeffrey Hunter, Vera Miles, Ward Bond, and Natalie Wood. Special guest speaker will be Wood’s younger sister, Lana Wood, who plays little Debbie, the girl kidnapped by the Comanches in the film’s opening section. Wood’s other credits include many popular TV series and her role as a Bond girl in Diamonds Are Forever. Screens Sunday, August 14, at 2:15 PM. 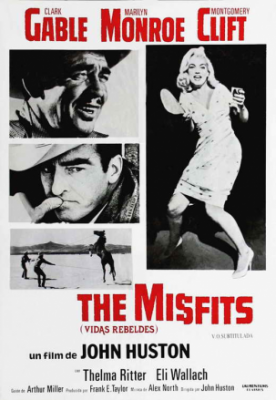 We close the weekend with a modern take on the oater genre. This 1961 film’s themes of outsiders and non-conformists misplaced in contemporary society, with no new undiscovered frontiers, provide a fitting elegy to the Western.

Directed by John Huston from an original screenplay by playwright Arthur Miller, with apt black-and-white cinematography by Russell Metty, this drama took on a heightened valedictory tone when it became the final film for both co-stars Clark Gable and Marilyn Monroe (married to Miller at the time).

Monroe’s portrayal of a lonely divorcee is among her best roles, and Gable’s aging cowboy is considered the greatest performance of his career. He died 12 days after completing filming. A superb ensemble includes Montgomery Clift, Eli Wallach, and Thelma Ritter.

Although a box office failure at the time, the British Film Institute notes that The Misfits “scores…in the remarkable intensity of the performances and the delineation of the characters’ complex relationships. It remains one of the finest works of all involved.” Screens Sunday, August 14, at 5:30 PM.