The new French drama MARIE’S STORY is set in a nineteenth-century convent, where the idealistic Sister Marguerite sees in a deaf and blind girl a unique potential, and despite her Mother Superior’s skepticism, vows to bring the wild young thing out of the darkness into which she was born. Based on true events, MARIE’S STORY recounts the courageous journey of a young nun and the lives she would change forever, confronting failures and discouragement with joyous faith and love. We are pleased to open the film at the Royal on Friday, May 29 as well as the next day at the Playhouse 7. 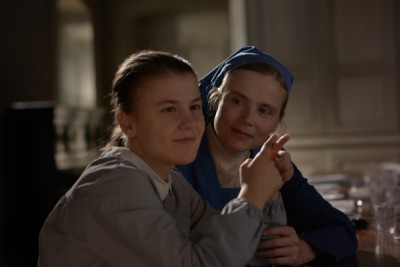 all about supporting films that feature female stories and lead characters, which is why we fell in love with French film MARIE’S STORY, directed by Jean-Pierre Ameris. The film stars Ariana Rivoire as the difficult yet extraordinary Marie Heurtin, and Isabelle Carre as the Catholic Nun Sister Margeurite who saw the beauty and depth in a girl who society shunned.

At the turn of the 19th century, a humble artisan and his wife have a daughter, Marie, who is born deaf and blind and unable to communicate with the world around her. Desperate to find a connection to their daughter and avoid sending her to an asylum, the Heurtins send fourteen-year-old Marie to the Larnay Institute in central France, where an order of Catholic nuns manage a school for deaf girls. There, the idealistic Sister Marguerite sees in Marie a unique potential, and despite her Mother Superior’s skepticism, vows to bring the wild young thing out of the darkness into which she was born.

It is a true story depicting a stunning visual sequence of a life transformed despite the odds. Sister Marguerite’s persistence is the most heart-warming part of this film. We were glued to the screen watching how on earth she was going to transform the life of this teen girl who everyone else had pretty much given up on.

Read the rest of the piece at girltalkhq.com.