They live in all four corners of the planet and share a thirst for knowledge. Almost instinctively they know that their well-being, indeed their survival, depends on knowledge and education. From the dangerous savannahs of Kenya to the winding trails of the Atlas Mountains in Morocco; from the suffocating heat of southern India to the vast, dizzying plateaus of Patagonia, these children are all united by the same quest, the same dream. Jackson, Zahira, Samuel and Carlito are the heroes of ON THE WAY TO SCHOOL, a film that interweaves portraits of four pupils forced to confront and overcome countless, often dangerous obstacles – enormous distances over treacherous territory, avoiding snakes, elephants, even bandits – on their journey to their classrooms.

We are very pleased to open this documentary, which “quietly reveals these four small stories as epically heroic and timeless journeys” (Village Voice), on Friday, March 6 at the Music Hall and March 7 at the Playhouse. 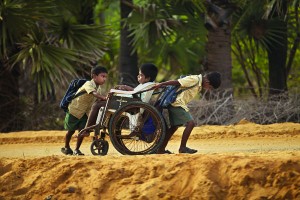