On July 14 we will have one-time screenings of the Broadway play THE NANCE, with Nathan Lane, at the Royal, Playhouse and NoHo. From today’s Playbill:

“Douglas Carter Beane‘s 2013 drama The Nance, which was produced by Lincoln Center Theater and starred two-time Tony Award winner Nathan Lane, will be seen in more than 300 movie theatres in the U.S. and Canada this summer.”

“In The Nance, according to press notes, playwright Douglas Carter Beane “tells the story of Chauncey Miles (Nathan Lane), a headline nance performer in the twilight of New York burlesque’s era. Integrating burlesque sketches into his drama, Beane paints the portrait of a homosexual man living and working in the secretive and dangerous gay world of 1930’s New York, whose outrageous antics on the burlesque stage stand in marked contrast to his messy offstage life.” 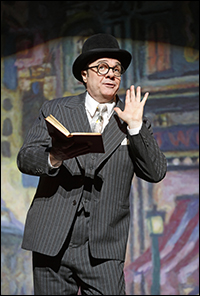