One of the finest screen performances last year was delivered by Ann Dowd in the drama Mass. Though she did not make it into the Oscar race, she was nominated for Critic’s Choice and BAFTA awards. Most moviegoers would be forgiven, however, if they didn’t know about the film or Ms. Dowd’s performance. The film did not do well when it opened in October and it was in and out of theatres before it could develop crucial word-of-mouth publicity.
We bring this up because we fear that history is repeating itself with the film A Love Song and the amazing performance by the veteran character actress, Dale Dickey.
She has been a very busy working actor for more than 25 years, racking up 131 credits on IMDB (which does not include her theater work). Like Dowd, Stephen Root and M. Emmet Walsh, she is one of those gifted character actors whose face any movie or TV fan immediately recognizes, though most people don’t know her name. She is usually cast in supporting roles but has the lead role in A Love Song, and she is brilliant. Her performance is easily one of the best of 2022, beautifully complemented by Wes Studi, but will people see it? The film is being released by a small independent distributor without a large publicity and advertising budget. What’s more, it’s a low-key love story about working class people, the kind of subject matter that doesn’t get much attention.

“Like a coy, concise short story you might remember having read years ago, A Love Song is the simplest of tales, but there’s a complex universe of longing contained within it.” ~ Bilge Ebiri, New York Magazine/Vulture 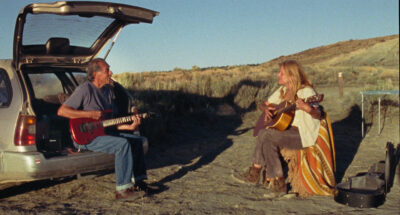 “A Love Song has the narrative economy and the sneaky emotional power of a well-crafted short story, plus a feel for isolation and rootlessness that harks back to some of the great drifter portraits of American independent cinema.” ~ Justin Chang, Los Angeles Times
So, people. Cinephiles! Please come out, enjoy and support A Love Song in a theater while you still can. We open it this Friday at the Royal, and we will add theatres on August 19. We will keep it playing as long as possible. If moviegoers show even a little support, that will go a long way toward keeping it in theatres, and help create greater awareness for the film and the two wonderful actors featured in the film.
https://www.youtube.com/watch?v=NysYn89m5y4&t=3s