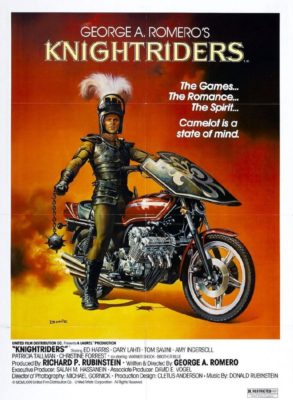 George A. Romero’s KNIGHTRIDERS may well be the only cycle flick ever to be played out in suits of armor. A hardcase motorcycle gang led by Ed Harris has found itself a neat money-making gimmick. Dressed as the knights of the round table, the cyclists pick up a few bucks at local “renaissance” fairs, selling handicrafts made by the more talented members of the gang. Harris’ great rival is Tom Savini, who has his own band of “black knights.” Keep an eye out for a chucklesome unbilled bit by novelist Stephen King.