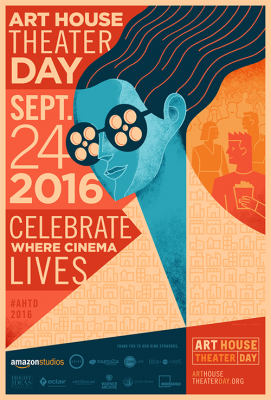 Saturday, September 24th is Art House Theater Day! It’s a day to recognize the contributions of film and filmmakers, staff and projectionists, and fellow brick and mortar theaters dedicated to providing access to the best cinematic experience.

Most importantly, it’s a day to thank our patrons for their year-round support. As a thank you, we’re offering a ticket discount to select art house films! If you have a friend that’s never been to an art house, this is the perfect day to bring them along for a unique movie-going adventure.

Enter the promo code ARTHOUSEDAY when you buy tickets to Saturday screenings of the films listed below! Discounts are available on laemmle.com only.

Tickets for showtimes before 6PM are $6 for Adults and Seniors and $4 for Laemmle Premiere Card Holders. General admission is normally $9.

Shows after 6PM are $10 for Adults, $6 for Seniors, and $8 for Premiere Card Holders. General admission is normally $12.

THE LOVERS AND THE DESPOT is a stranger-than-fiction documentary about South Korean filmmaker Shin Sang-ok and actress Choi Eun-hee, who were kidnapped by Kim Jong-il and forced to produce 17 films. Playing at the Playhouse 7, NoHo 7, and Royal Theatre. Click here for tickets.

TANNA is set in the South Pacific where a young girl from one of the last traditional tribes falls in love with her chief’s grandson. When an intertribal war escalates, she is unknowingly betrothed as part of a peace deal. Playing at the Playhouse 7 and Royal Theatre. Click here for tickets.

View the trailers for all four films: