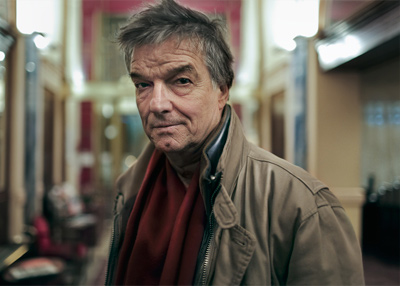 A touching and tense drama about destiny, connections, and passion, 3 HEARTS presents a headily romantic look at a classic love triangle. One night in provincial France, Marc (Benoît Poelvoorde) meets Sylvie (Charlotte Gainsbourg) after missing his train back to Paris. Instantly and intensely drawn to one another, they wander through the streets until morning in rare, almost choreographed, harmony. A thwarted plan for a second meeting sends each in a separate direction – Sylvie reunites with her ex and leaves France; Marc falls in love and marries. What neither knows is that Marc’s new bride is Sylvie’s sister, Sophie (Chiara Mastroianni). Upon Sylvie’s return to France, the spark between her and Marc is reignited in ways that will forever alter the relationships between sister to sister and husband to wife.

We are pleased to open 3 HEARTS on Friday, March 20 at our Royal, Playhouse and Town Center theaters and on March 27 at the Claremont 5. Twitch Film just published this interview with the filmmaker, Benoît Jacquot:

Benoit Jacquot started his career as Marguerite Duras’ assistant director in the 70s and went on to direct many films with strong female characters. In doing so, he catapulted the careers of many actresses into leading ladies of French cinema, among them Judith Godreche (Ridicule), Virginie Ledoyen (The Beach, 8 Women), Isild Le Besco (Sade, A tout de suite), Sandrine Kiberlain (Seventh Heaven, Apres Vous) . Lately, he has been keeping himself busy with two films out right now: 3 Hearts opening night film for this year’s Rendez-vous with French Cinema and his Diary of Chambermaid shown in competition at this year’s Berlinale, continuing the international success of Marie Antoinette-intrigue Farewell My Queen (starring Léa Seydoux, Diane Kruger and Ledoyen) a couple years back.

Jacquot was in town for Rendez-vous and I had a chance to ask him about having a reputation as go-to director for women’s roles, his remake of Diary of Chambermaid and his upcoming adaptation of Don Delillo’s The Body Artist (Son Corps).

TwitchFilm: You’ve been making films since the 70s and worked with many of the France’s leading actresses. In fact, you’ve made some of these leading ladies where they are right now. What is it that these actresses interests you more than actors?

Benoit Jacquot: Well because they are women. (laughs) And as far as I know, I’m not one of them.

When you start a project, do you always start with certain actresses in mind first then build a story around them?

For most of the time, the key or the determining factor in what process I’m going to use depends on my desire to work with certain actresses or actors. They usually fall into two categories: there are actresses who are already very well known – Catherine Deneuve, Isabelle Huppert, for example, but also actresses who are young and just starting out and who hope to evolve to their level. It’s either people who are very new or actresses who are very accomplished. But it also varies depending on economics and financing of a particular project, because they may not be necessarily the same.

What prompted you to make 3 HEARTS in particular? Obviously you haven’t worked with Charlotte Gainsbourg or Chiara Mastroiani before. Did you have those actresses in mind?

For me, the first thing that happened here, even before sketching what the silhouette of the film would be, was my wish to work with Charlotte Gainsbourg. The second factor was after making several period films, I wanted to make something contemporary. And of course the third which may contradict the first, in this particular film, the central character to be a male. Because number of my previous films it was the female characters in the center.

Did you have Benoit Poelvoorde in the role of Marc?

Not exactly. Benoit Poelvoorde was somebody I had in mind for a while but really didn’t know in advance that Marc would be the role that I would have him in.

So characters are specifically assigned. It’s not like Gainsbourg would play Sophie, not Sylvie and Mastroianni would  play Sylvie and not Sophie.

No. But I once suggested Charlotte play both of the characters.

We discussed it but we quickly saw that it’s something that wouldn’t work in a realistic setting.

In the film, it is Mme. Berger, played by Catherine Deneuve, knows that there is something going on between Sylvie and Marc. How does she know their secret?

I know Catherine pretty well and despite her image of this ultra sophisticated woman, she also has a very animal quality in her. I think what was interesting was to have her play this role of almost an animal mother. In a sense that she intrinsically knows that danger is approaching, as if she smells it. That’s really how she plays it, with the way she throws glances and in intonation of her voice.

You seem very busy with two films coming out. As you mentioned, you’ve done period piece before this and you do something small, but now you are doing another period piece, DIARY OF A CHAMBERMAID. I am wondering about the process of choosing your next project. Do you do project after project as it comes your way or do you always prepare for your next project while working on the current one?

More recently it seems the case that I am always planning my next film while working on the current one. Sometimes it happens that I have all these different ideas and I throw out many ideas and some of them will float and some won’t. Curiously, at this particular time, all of them seem to float. So it seems like these are all happening at the same time. Sometimes it happens and things don’t work. It happened once or twice and I had to stop everything in the middle of it.

Does it mean you are at your prime as an artist, creatively?

I don’t tend to think of any time frame as the peak of my career or anything because what I’m trying to do with my career is to continue making films that responds to some inner requirement that I have.

Why DIARY OF A CHAMBERMAID, since it was made twice before?

I think that in this case, you have a book that was adapted by two very great filmmakers (Jean Renoir and Luis Buñuel). What I thought was interesting was why this book had motivated two filmmakers of that stature to make it into a film. So I went back to the novel to see. Also those two films are very different from each other, so making a third film which would be invariably different also, I had no pressure of embarrassing myself. (laughs)

Did you see Léa Seydoux as the main character from the beginning?

Yes. There is not a scene in Diary of a Chambermaid that she isn’t in.

Can you tell me about the adaptation of Don Delillo’s THE BODY ARTIST?

It was actually the suggestion of producer, Paolo Branco (who also produced David Cronenberg’s Delillo adaptation, Cosmopolis) that it would be a good book to adapt. I have an idea on how to approach it and I have the script written already. But at this point I don’t know when it will happen. I think perhaps 2016.

If it happens would it be an English language production?

No. Half and half perhaps.

I mean, obviously there’s going to be another strong female role.

Yes. And most likely I will make it with an unknown actress. But as much as possible, I’d prefer a well known actor for the male character.

I hope for the actress, yes.

What about THE BODY ARTIST attracted you?

I think what attracted me is an idea of this woman who is a very strong character, who is able to bring back a dead man from her past. And I think in many ways, this is a reflection of what cinema is. It’s that evocation of a phantom, a ghost.

Dustin Chang is a freelance writer. His musings and opinions on the world can be found at www.dustinchang.com