In case you missed the excellent documentary GIRL RISING when we played it last year, several local filmmakers are hosting a screening at the NoHo 7 on  February 26, 2014. Chrissy Dodson and Mandi Moss aim to bring a global movement to educate girls and create meaningful media with a special community screening of GIRL RISING that night at 7:30. This is a crowd-funded event, requiring 65 pre-sale tickets purchased by Monday, February 17 in order to take place. Pre-Sale Tickets Available for $11 http://bit.ly/GIRLRISING

GIRL RISING is a groundbreaking feature film that spotlights the stories of nine unforgettable girls born into unforgiving circumstances. The film captures their dreams, their voices and their remarkable lives with narration by notable performers, including Meryl Streep and Alicia Keys. The event is part of a larger movement dedicated to empowering and achieving educational equality for girls around the world. This International Women’s Day pre-celebration will bring entertainment industry professionals, Girl Scout leaders, students, educators, artists and community members together to raise awareness about the importance of girls’ education in developing nations and to create meaningful media. It is a fundraising event with a percentage of ticket sales and all donations supporting the Girl Rising Fund. “We believe in the power of education and media to change not only a girl, but the world,” said host Chrissy Dodson. “By hosting a community event featuring Girl Rising, we are demonstrating our commitment to breaking down the barriers that prevent girls around the world from going to school. We are proud to be part of this movement in Los Angeles. We hope all community members, artists and entertainment professionals will join us to collaborate, inspire and affect positive change.”

GIRL RISING was directed by Academy Award-nominee Richard E. Robbins and is narrated by Cate Blanchett, Priyanka Chopra, Selena Gomez, Anne Hathaway, Salma Hayek, Alicia Keys, Chloë Moretz, Liam Neeson, Freida Pinto, Meryl Streep, and Kerry Washington. “If to see it is to know it, this film delivers hope – reasonable, measurable, tangible hope that the world can be healed and helped to a better future,” said Meryl Streep. “It’s a powerful film that has the potential to inspire change in the world. If you’re not moved, you’re not breathing,” said Alicia Keys. Girl Rising is also a movement that embraces the words of activist Malala Yousafzai: “One child, one teacher, one pen and one book can change the world. Education is the only solution.” The movement was founded by award-winning journalists at The Documentary Group and Paul G. Allen’s Vulcan Productions, along with strategic partner, Intel Corporation. Girl Rising’s International Day of the Girl activities are sponsored by Intel. Girl Rising is built on a foundation of partnerships with NGOs, corporations, policy makers, and grassroots organizations — all working to change minds, lives, and policy. A portion of film ticket sales goes to support girl-focused programs through the Girl Rising Fund. The Fund is distributed to Girl Rising’s high-impact network of non-profit partners who are working on the ground: A New Day Cambodia, CARE, Girl Up/United Nations Foundation, Partners in Health, Plan International USA, Room to Read, and World Vision. GIRL RISING IS A FILM. GIRL RISING IS A MOVEMENT. GIRL RISING IS AN OPPORTUNITY TO CHANGE THE FUTURE. girlrising.com Tickets http://bit.ly/GIRLRISING 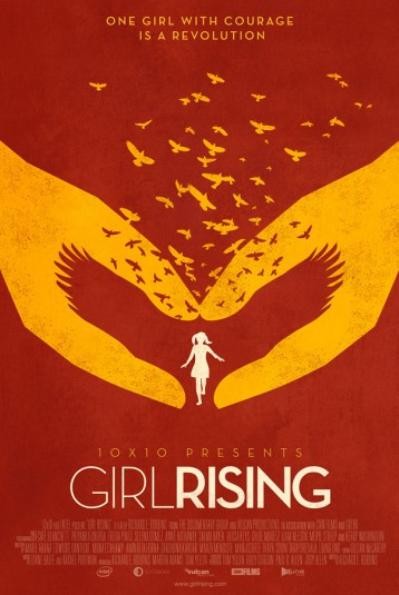