At a fading vacation resort, 11-year-old Sophie treasures rare time together with her loving and idealistic father, Calum. As a world of adolescence creeps into view, beyond her eye Calum struggles under the weight of life outside of fatherhood. Twenty years later, Sophie’s tender recollections of their last holiday become a powerful and heartrending portrait of their relationship, as she tries to reconcile the father she knew with the man she didn’t, in Charlotte Wells’ superb and searingly emotional debut film. We open Aftersun this Friday at the Newhall, NoHo and Town Center and November 18 at the Claremont 5.

Charlotte Wells is a Scottish filmmaker based in New York. She wrote and directed three short films as a student in the MBA/MFA dual-degree program at NYU where she was supported by BAFTA New York and Los Angeles. Wells has been featured in Filmmaker Magazine’s “25 Faces of Independent Film” and was a Fellow at the 2020 Sundance Institute Screenwriters and Directors Labs. Aftersun is her first feature.

“A stunner, a heartbreaker on love, grief and the random moments in life that solidify into haunting memories.” ~ Randy Myers, San Jose Mercury News

“Aftersun stirs powerfully inarticulate emotions of what has been given and what is owed – what we had that we missed knowing we had and what we hold on to because it’s the only thing that’s left.” ~ Ty Burr, Ty Burr’s Watchlist 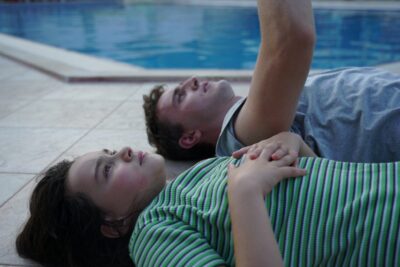 “A film to be experienced — just go with it — the full impact of Aftersun comes as the credits start to roll, and the processing begins.” ~ G. Allen Johnson, San Francisco Chronicle