It was an unprecedented Oscars for foreign language cinema, with “Parasite” taking not only Best International Film but Best Director and Picture. Laemmle Oscar Contest participants who correctly guessed the Academy would break with tradition and choose a foreign film over an English-language film won our contest. First place garnered a Laemmle Premiere Card worth $150 and the two second place winners get Laemmle Premiere Cards worth $100. The winners’ prizes are on the way.

We had a sole first place winner this year with 23 out of 24 categories correctly selected! The first place winner only missed one category, Best Director, by incorrectly selecting Todd Phillips from “Joker” instead of eventual winner Bong Joon Ho from “Parasite.”
The two 2nd place winners missed two categories out of 24, both choosing “1917” to win Best Sound Editing instead of eventual winner “Ford v Ferrari.” One incorrectly chose “Parasite” for Best Editing instead of eventual winner “Ford vs. Ferrari,” and the other chose  “Once Upon a Time in Hollywood” instead of eventual winner “Little Women” for Best Costume. They both chose the exact same and closest to actual run-time of 205 minutes on the tie-break question resulting in two 2nd place winners!
Best Picture winner “Parasite” was selected by only 18% of entries but nearly 90% for Best Foreign Film. “1917” received nearly 50% of the votes for Best Picture. No one picked “Once Upon a Time…in Hollywood” to win Best Picture. Sam Mendes had 50% of the Best Director votes for “1917,” no doubt because he won the DGA award. “American Factory” had 50% of the votes for Best Documentary. “Toy Story 4” had 50% of the vote for Best Animated Feature. Best Adapted Screenplay winner “Jojo Rabbit” and fellow nominee “LIttle Women” both received a good portion of the votes at 35% each. Joaquin Phoenix did not receive a unanimous vote for Best Actor but he did receive the second highest vote tally, after Parasite for Best Foreign Film, at 84%.

Congratulations to the winners and thanks to all for playing! 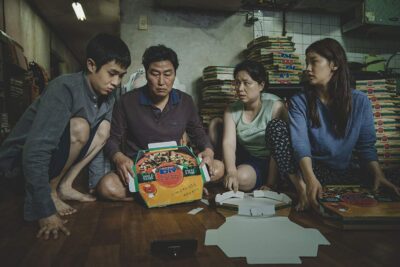