This Just In! Al Leong (Uli, aka the Candy Bar Terrorist in Die Hard) will be introducing the film on Thursday!
Join Laemmle and  Eat|See|Hear for Happy Holidaze at the NoHo 7 in North Hollywood! Every Thursday in December our Throwback Thursday (#TBT) series presents our favorite holiday classics— with a twist! Doors open at 7PM, trivia starts at 7:30PM, and films begin at 7:40PM! It all starts Thursday, December 1st with EDWARD SCISSORHANDS. Check out the full schedule below. For tickets and our full #TBT schedule, visit laemmle.com/tbt! 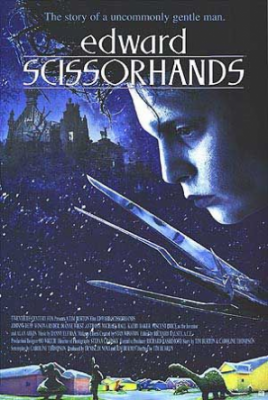 Tim Burton’s Edward Scissorhands opens as an eccentric inventor (Vincent Price) lovingly assembles a synthetic youth named Edward (Johnny Depp). Edward has all the essential ingredients for today’s standard body, with the exception of a pair of hands. For what is initially thought to be a temporary period, he is fitted with long, scissor-like extremities that, while able to trim a mean hedge, are hardly conducive to day-to-day life. When the kindly inventor dies, however, Edward is left lonely and cursed with some very heavy metal for hands. He is eventually taken in by a suburban family and falls in love with their teenage daughter Kim (Winona Ryder). Edward finds himself a local celebrity after the town realizes that his talents include creative hedge trimming and an unrivaled ability to cut hair. His so-called friends are proven fair-weather when Edward is accused of a crime. Buy Tickets. 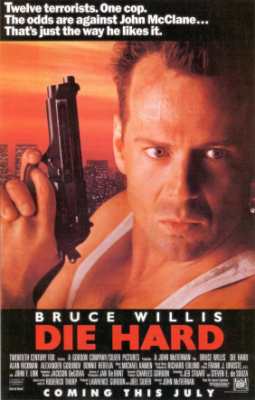 It’s Christmas time in L.A., and there’s an employee party in progress on the 30th floor of the Nakatomi Corporation building. The revelry comes to a violent end when the partygoers are taken hostage by a group of terrorists headed by Hans Gruber (Alan Rickman), who plan to steal the 600 million dollars locked in Nakatomi’s high-tech safe. In truth, Gruber and his henchmen are only pretending to be politically motivated to throw the authorities off track; also in truth, Gruber has no intention of allowing anyone to get out of the building alive. Meanwhile, New York cop John McClane (Bruce Willis) has come to L.A. to visit his estranged wife, Holly (Bonnie Bedelia), who happens to be one of the hostages. Disregarding the orders of the authorities surrounding the building, McClane, who fears nothing (except heights), takes on the villains, armed with one handgun and plenty of chutzpah. Buy Tickets. 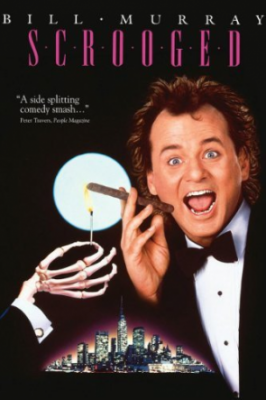 A darkly comic and surreal contemporization of Charles Dickens’s A Christmas Carol, this effects-heavy Bill Murray holiday vehicle from 1988 sees the former SNL funnyman assuming the role of television executive Frank Cross, the meanest and most depraved man on earth. Cross will stoop to unheard of levels to increase his network’s ratings — even if it means mounting outrageous programs to retain an audience, such as “Robert Goulet’s Cajun Christmas” and Lee Majors in “The Night the Reindeer Died.” Cross plots his foulest move, however, for the Christmas holiday, when he will force his office staff to mount a live production of A Christmas Carol on national television — and thus work through Christmas Eve. Cross’s life is turned upside down with visits from three ghosts: a craggy-faced cabbie known as The Ghost of Christmas Past (David Johansen); the sugar-plum fairy Ghost of Christmas Present (Carol Kane); and, eventually, the caped, headless Ghost of Christmas Future, who will send Frank sliding into a crematory oven — just before he gives the sleazoid one last chance to redeem himself. Richard Donner directs, from a script by Michael O’Donoghue and Mitch Glazer. Buy Tickets. 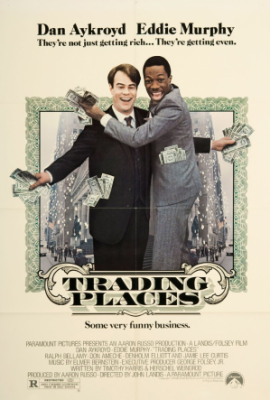 The “nature-nurture” theory that motivated so many Three Stooges comedies is the basis of John Landis’s hit comedy. The fabulously wealthy but morally bankrupt Duke brothers (Ralph Bellamy and Don Ameche) make a one-dollar bet over heredity vs. environment. Curious as to what might happen if different lifestyles were reversed, they arrange for impoverished street hustler Billy Ray Valentine (Eddie Murphy) to be placed in the lap of luxury and trained for a cushy career in commodities brokerage. Simultaneously, they set about to reduce aristocratic yuppie Louis Winthorpe III (Dan Aykroyd to poverty and disgrace, hiring a prostitute (Jamie Lee Curtis) to hasten his downfall. When Billy Ray figures out that the brothers intend to dump him back on the streets once their experiment is complete, he seeks out Winthorpe, and together the pauper-turned-prince and prince-turned-pauper plot an uproarious revenge. With the good-hearted prostitute and Winthorpe’s faithful butler (Denholm Elliott) as their accomplices, they set about to hit the brothers where it really hurts: in the pocketbook. Buy Tickets.