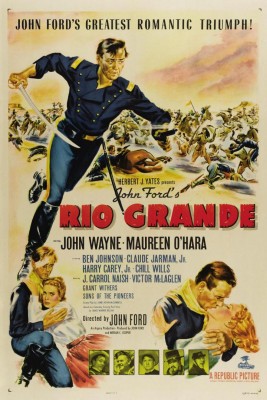 If you haven’t been keeping up with our Anniversary Classics Series, you’ve been missing out! Last week’s screening of YOUNG CASSIDY honoring legendary film editor Anne V. Coates was a prime example of how film history lives and breathes. The youthful 90-year old Coates passed on the wisdom of her more than sixty year career (and still going strong!) to an appreciative audience of admirers. More importantly, it demonstrated how vibrant industry veterans can be in our youth obsessed culture and film industry.

Now there’s another chance to celebrate film history and those witness to it with our tribute to the late Maureen O’Hara in our 65th anniversary screening of John Ford’s RIO GRANDE.

In today’s L.A. Times, Kenneth Turan wrote, “John Ford is the acknowledged master of the western, and his Cavalry trilogy one of the highpoints of his career, but “Rio Grande” the third film of the group (after “Fort Apache” and “She Wore a Yellow Ribbon”) is not revived as often as the other two.

“Now, in honor of its 65th anniversary, the 1950 film will get a big screen appearance on Tuesday at 7 p.m. at Laemmle’s Royal in West Los Angeles, a location that is sure to flatter the picture’s expansive Monument Valley setting. More than that, costar Claude Jarman will make an appearance and participate in a Q&A after the screening.

“Jarman played Trooper Jefferson “Jeff” Yorke, assigned to the command of the father he hardly knows, Lt. Colonel Kirby Yorke, gruff as only John Wayne knew how to be. Adding spice to the story is the appearance of the trooper’s mother and Yorke’s estranged wife, played by Maureen O’Hara in the first of five on-screen pairings with Wayne. Sparks, as they say, will fly.”

RIO GRANDE is part of our Anniversary Classics Series. For tickets, details, and more, visit:
www.laemmle.com/ac.