Last night we were thrilled to host Eva Marie Saint at the Royal Theater for a packed 55th anniversary screening of EXODUS. Here’s a shot of her interacting with a fan, autographing the original EXODUS soundtrack on vinyl. 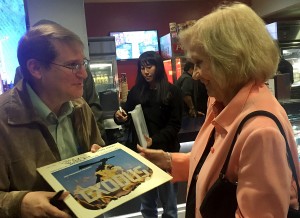 Two weeks from now we’ll be joined at the Royal by GETTING STRAIGHT star Elliott Gould and director Richard Rush for the film’s 45th anniversary screening. As with all of our Anniversary Classics screenings, the Q&A will be moderated by L.A. Film Critics Association President Stephen Farber. The event will be at the Royal on April 15 starting at 7:30 PM.

“Never trust anyone over 30!” This mantra of the counterculture began to penetrate movies of the late 1960s, when the studios decided to make a series of films about campus rebellion and the sexual revolution.  This most successful of this wave of movies was GETTING STRAIGHT (1970), the first big studio movie directed by Oscar-nominated director Rush (The Stunt Man) and one of the first starring roles for Oscar-nominated actor Gould (Bob & Carol & Ted & Alice, MASH, The Long Goodbye, California Split, Ingmar Bergman’s The Touch, Bugsy, Steven Soderbergh’s Ocean’s Eleven trilogy).  Variety called GETTING STRAIGHT “an outstanding film… comprehensive, cynical, sympathetic, flip, touching and hilarious.”  The New York Times praised Gould for “a brilliant, mercurial performance” and added that the actor ignites the film “with a fervor and wonderful comic sense of reality.”  More recently, critic Leonard Maltin noted that “the central issue of graduate student Gould choosing between academic double-talk and his beliefs remains relevant.”  The film’s co-stars include Candice Bergen, Robert F. Lyons, Jeff Corey, Cecil Kellaway, Max Julien, Jeannie Berlin, John Rubinstein, and Brenda Sykes.

Bring out your 60’s outfits and join us in celebrating director Richard Rush’s 86th birthday at this 45th anniversary screening of GETTING STRAIGHT on April 15.