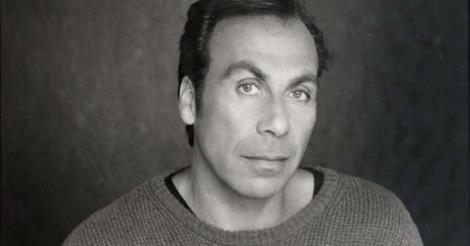 As you may have heard, actor, artist, comedian Taylor Negron passed away last week.  Taylor was very dear to all of us at Lammle.  Recently, we had the great opportunity to work closely with him as we exhibited his series of “Snow Paintings” at the Royal as part of our Art in the Arthouse program.  Below are some remembrances of Taylor from the program’s curator, Joshua Elias.

Taylor Negron was a special artist in all senses. He was really funny, interesting, irreverent, philosophical, deeply spiritual, and a man of refined taste.

I met Taylor through Sharon Barr in 1983. Our house burned down and Taylor opened his house up to us as he traveled back and forth to France.

He would introduce us to his friends as “my burn victimmmms.”

In the hills off of Beechwood Canyon near the Reservoir and like all of Taylor’s residences it was filled with light and Spanish windows that seemed to let the wind blow through the entire house.

There was a giant beehive outside the window and that made for drama.

Musician and Taylor’s lifelong friend Syd Straw came to stay and the house was full of musicians, comedians, actors and magic.

Taylor would draw often in the late afternoons. He was so generous.

Once a house full of comedians came back for a dinner party and a party party and everyone got up in the middle of the meal and stood on chairs.

In more recent times we reconnected through his paintings. I curated his work in Laemmle’s Art in the Arthouse at the Royal Theatre.

He painted many people seated as they are, spiritual portraits. He painted houses and intimate rooms. He was a very talented painter as well as a writer and a comedian.

The exhibit was a big success and Taylor and Logan Heftel performed in the theatre next to his artwork. The art opening, like Taylor, was a gem. We at Laemmle and me personally had the joy to know Taylor. He left a great impression on us all.

Editor’s Note: Actor, artist, comedian, and playwright Taylor Negron lost his battle with cancer on January 10, 2015. You can see examples of his work and hear him discuss his process in the short video, “Why I Paint”.