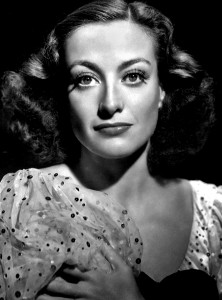 Laemmle Theatres and FilmNoirBlonde.com are pleased to present a double feature on Monday, March 23, at Laemmle’s NoHo 7, to mark the birthday of a star from Hollywood’s Golden Age, Joan Crawford.

A gifted actress and the ultimate movie star, Joan Crawford found that by the mid-1940s, her career had stalled. She restarted it with the help of film noir, namely 1945’s “Mildred Pierce,” by director Michael Curtiz, for which she won the Best Actress Oscar. Whether she played a tough broad or a lady in distress, Crawford was especially well suited for the genre’s expressionistic intensity and she starred in many film-noir titles between 1945 and 1962.

On Monday, March 23, Laemmle’s NoHo 7 will pay tribute to her legacy with a special double bill from Warner Bros.: “Possessed” (1947, Curtis Bernhardt) and “What Ever Happened to Baby Jane?” (1962, Robert Aldrich).

The program will start at 7:30 p.m, with “Possessed” and “What Ever Happened to Baby Jane?”  at 9:55. Tickets are $11 each, $15 for the double feature. There will be a special birthday cake for Ms. Crawford’s fans and Warner Archive will provide select prizes.

Joining the party will be Jacqueline Fitzgerald, founder and editor of FilmNoirBlonde.com. Fitzgerald will introduce the movies.

In “Possessed” (also starring Van Heflin and Raymond Massey) Crawford gives a memorable performance as a woman who can’t get over a bad relationship. In “What Ever Happened to Baby Jane?” she is Blanche Hudson, a once-glamorous Hollywood actress who lives with her demented sister (Bette Davis), a former child star.