“Don’t expose him to bright light. Don’t ever get him wet. And don’t ever, ever feed him after midnight.”

Laemmle Theatres and the Anniversary Classics Series present the delicious horror comedy, GREMLINS, which demonstrated the dire consequences of ignoring those three simple rules. Chris Columbus (the writer or director of such hit films as ‘The Goonies,’ ‘Mrs. Doubtfire,’ ‘Home Alone,’ and the first two Harry Potter movies) conceived the story, and Steven Spielberg acted as executive producer, but it was director Joe Dante who set the distinctive tone of “malicious madcap mischief,” in the words of Newsweek’s David Ansen. 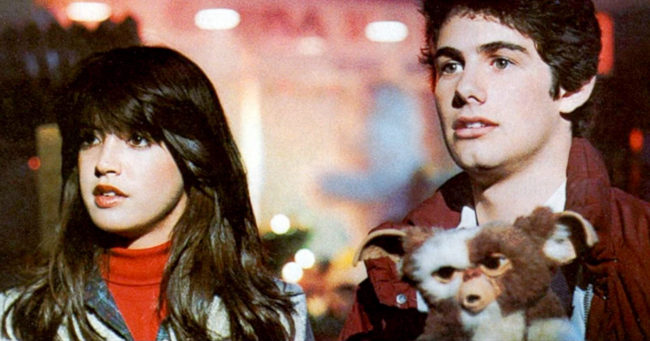 Dante had already brought wit to the underwater monster movie (‘Piranha’) and the werewolf movie (‘The Howling’), but ‘Gremlins’ took his talents to a new level. Kenneth Turan, then writing for California Magazine, declared, “’Gremlins’ is Dante’s most accomplished film, a paradigm of zesty, ghoulish fun.” Dante loved to pepper his movies with sly references to other films, and ‘Gremlins’ is set in the idyllic small town of Kingston Falls, meant to recall Bedford Falls from Frank Capra’s classic, ‘It’s a Wonderful Life’ (glimpsed on TV in a scene in Dante’s movie). ‘Gremlins’ is also set at Christmas, but the holidays are anything but festive in this vision of Norman Rockwell’s America turned upside down.

The story begins when a father (Hoyt Axton) purchases a lovable furry creature called a mogwai for his son Billy (Zach Galligan). The shopkeeper offers a few admonitions but neglects to say that if the mogwai is drenched or fed after midnight, it will turn into a spiteful, malevolent gremlin. Soon the entire town is overwhelmed with these miniature monsters determined to destroy. The other characters in the story are played by an engaging ensemble, including Phoebe Cates, Frances Lee McCain, Keye Luke, Glynn Turman, Dick Miller, Corey Feldman, Judge Reinhold, and Polly Holliday, with cameo appearances by Chuck Jones, composer Jerry Goldsmith, and Spielberg himself. But perhaps the biggest star was designer Chris Walas, who created the puppets who perform their own delirious dance of death. 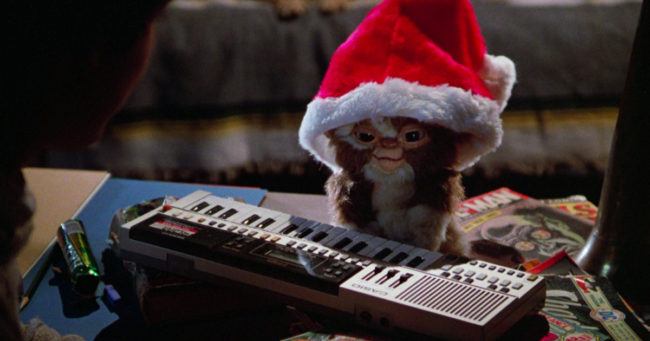 The film incorporates several classic sequences, including one in which a small-town mom (played by McCain) battles the gremlins with her trusty kitchen appliances and the climactic nightmare in which the gremlins take over a movie theater presenting a holiday screening of Walt Disney’s ‘Snow White and the Seven Dwarfs.’ The movie was one of the biggest hits of 1984 and also earned many excellent reviews. Gene Siskel called ‘Gremlins’ “a wickedly funny and slightly sick ride…playfulness abounds.” Screen International added, “The sight gags are deliriously inventive and frequently devilishly sick.” 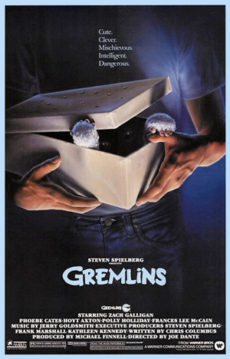 Dante went on to direct such films as ‘The Burbs’ with Tom Hanks, ‘Explorers’ with Ethan Hawke, ‘Innerspace’ with Dennis Quaid and Martin Short, ‘Matinee’ with John Goodman, and of course ‘Gremlins 2: The New Batch.’ For this special matinee screening, feel free to bring the kids—at least the older kids with a taste for macabre thrills.

Our 35th anniversary screening of GREMLINS (1984) followed by a Q&A with Director Joe Dante and film critic Stephen Farber plays on Sunday, July 14, at 3 PM at the Ahrya Fine Arts in Beverly Hills. Click here for tickets.