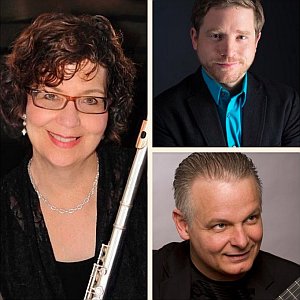 Flutist Susan Greenberg enjoys a versatile career as soloist, chamber musician, symphony player, and recording artist. The Los Angeles Times has described her playing as “brilliant,” “elegant” and “supple,” and has lauded her “panache” and “musical projection.” During her 36 years with the LA Chamber Orchestra, she was a frequent soloist on both flute and piccolo, premiering a concerto for piccolo by Bruce Broughton and performing a concerto for flute, alto flute and piccolo written for her by Gernot Wolfgang. Presently she is the principal flutist with the Santa Monica Symphony and the Vicente Chamber Orchestra. She has performed with the Los Angeles Philharmonic, L.A. Opera, New York City Opera, American Ballet Theater, as well as at the Casals, Ojai and Martha’s Vineyard Music Festivals. he received both her B.A., cum laude, and her M.A. from UCLA.  She is the Co-Artistic Director of Chamber Music Palisades, now celebrating its twenty-first season. Ms. Greenberg has recorded for over 500 motion pictures and many TV television shows, including the Simpsons for 25 years.

Versatile tenor Jon Lee Keenan studied Classical Voice and Jazz Bass at UNLV. Jon relocated to Southern California to pursue a career in classical singing, and study vocal arts at the USC Thornton School of Music. Shortly after moving to LA, Jon was selected to join the LA Master Chorale and has been featured as a soloist at Walt Disney Concert Hall in each season since. Recent highlights with the Chorale include the role of “Evangelist” in Bach’s St. Matthew Passion, tenor soloist in Handel’s Messiah and Bach’s Magnificat. Jon recently recorded the role “Gniphos” in the LA Philharmonic’s production of Lou Harrison’s Young Caesar, released internationally in 2018 on The Industry Records. This season’s highlights include appearances with the Corona Del Mar Baroque Festival in Bach’s Magnificat; Various roles in John Cage’s Europeras I and II with the Los Angeles Philharmonic, and an international tour of Lagrime di San Pietro with music by Orlando di Lasso and staging by Peter Sellars.

Kenton Youngstrom, guitarist, composer, and educator is the first in a long line of prize-winning students of Jim Smith at the University of Southern California. While earning his Bachelor of Music and Master of Music degrees, he studied composition with Donald Crockett, arranging with Darniell Pershing, and film scoring with David Raksin.  Mr. Youngstrom has performed concerts and recitals with numerous jazz notables such as pianists Taylor Eigsti and Dave Brubeck, flutist Hubert Laws, bassist Scott Colley and guitarist Larry Koonse. Producing credits include the Falla Guitar Trio’s Concord Records LP, “Virtuoso Music for Three Guitars” which won a Record of the Year Award from Stereo Review magazine. Mr. Youngstrom teaches guitar at the Colburn Community School of Performing Arts. 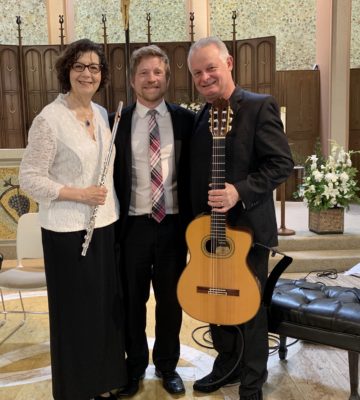 #CatVideoFest2020 is a compilation reel of the lat